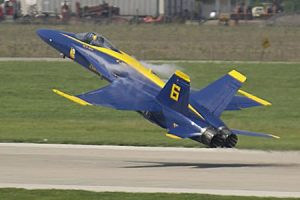 The United States Navy's Navy Flight Demonstration Squadron, popularly known as the Blue Angels, Is Coming to San Antonio on October 29th and 30th at the Randolph Air Force Base. Come out and see the oldest formal flying aerobatic team. Watch as the Navy's squadron of six demonstrate thier skills in the F/A-18 Hornet.

You all are invited to this year's jam-packed show, featuring exciting and diverse military and civilian acts, In addition, numerous static display aircraft and vehicles from all over the country will be on hand to view close up. The event is free and open to the public, with gates opening at 9am.

Today is a very special and memorable day in your military career that will remain with you throughout your lifetime. You have survived the ultimate test of your peers and have proven to be completely deserving to wear the crest of the U.S. Navy Blue Angels. The prestige of wearing the Blue Angels uniform carries with it an extraordinary honor – one that reflects not only on you as an individual, but on your teammates and the entire squadron. To the crowds at the air shows and to the public at hospitals and schools nationwide, you are a symbol of the Navy and Marine Corps' finest. You bring pride, hope and a promise for tomorrow's Navy and Marine Corps in the smiles and handshakes of today's youth. Remember today as the day you became a Blue Angel; look around at your teammates and commit this special bond to memory. "Once a Blue Angel, always a Blue Angel," rings true for all those who wear the crest of the U.S. Navy Blue Angels. Welcome to the team. —The Blue Angels Creed, written by JO1 Cathy Konn.