The Cibolo Creek Flows Through Boerne

A River Flows Through It 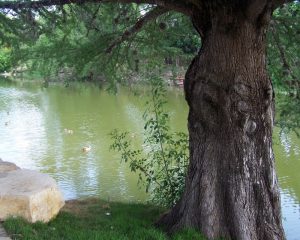 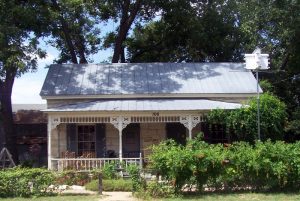 As the Riverwalk of San Antonio is such an ornament to the city and such a popular tourist attraction (only second after the Alamo) that one of the nicknames for our fair town is 'The River City' you'd think that any municipal organization possessing the necessary attribute – a permanent body of water deeper than a puddle in, or flowing through downtown – would have been been seen as a gift and an opportunity to do something like it. Maybe not cheek by cheek eateries and boutiques – but at least a pleasant string park, paralleling the river bank can this be created, for the benefit of the residents, the enriching of those retail establishments lucky to overlook it, and the sheer aesthetic pleasure of visitors to such a blessed community. 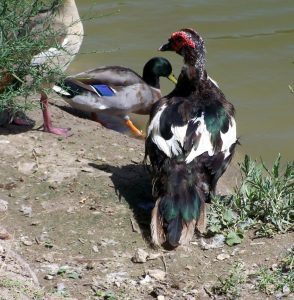 And so has the community of Boerne done, for a number of blocks paralleling River Road, on either side of Main Street. There is a generous paved trail, some added landscaping and stone work, paralleling the northern bank of Cibolo Creek as it runs through town. It seems that back in the day, Cibolo Creek was just as prone to overflow its banks and flood out parts of Boerne – just as the San Antonio River did, although on a much grander scale. We had noticed the new construction being done on the park, once we discovered Route 46/River Road; the back way between San Antonio and Boerne. So, last weekend we took advantage of slightly cooler temperatures to make a return trip to Boerne, as my daughter had her eye on certain items at the Squirrel's Nest Resale Shop. The Squirrel's Nest benefits Wildlife Rescue and Rehabilitation – an organization that everyone in this part of Texas ought to know about and support, since they are the go-to people when you find an injured, distressed and otherwise out-of-place wild animal or bird. 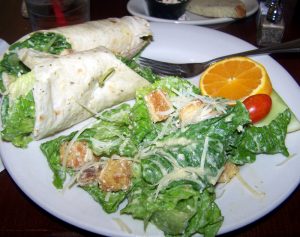 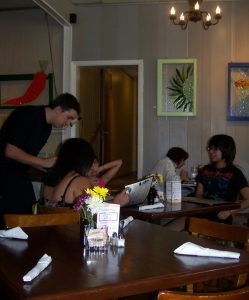 We had lunch at the Bear Moon Café – which was quite good; everything is made in-house and the servings are generous. Then we walked around a bit, and checked out some of the shops. This was not so much for what was in them, a lot of which was terribly high-end and pricy, but rather to look at the buildings themselves, many of which are historic old houses and business premises, and enormously charming in that respect. They were built for Texas, in the days before air conditioning, and some of them even before electrification: small rooms which opened into other rooms, or a central hall, with high ceilings, and tall windows. Usually there was a wide, shaded porch across the front, and if two-storied, those rooms on the upper floor also opened onto a verandah.. 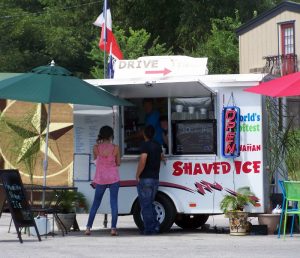 The Riverside Park already seems to be popular; we saw one family eating a picnic lunch, and a number of others settled in with fishing gear, sending their hooks into the lazy green water. The ducks and geese had all sought out shady places, on the opposite bank, though. The only other water critters we saw were turtles; and we didn't realize at first that they were turtles. I thought their heads sticking up above the surface were just lengths of broken branch, until the heads vanished below the water, and there was a soup-bowl sized turtle, just dimly seen, diving down into deeper water.

All in all, a lovely afternoon in the Hill Country. That was my Saturday – and yours?