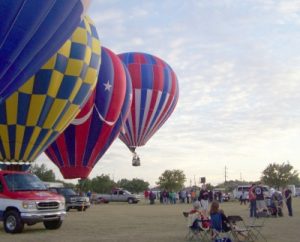 So, who would have thought it - we drove to Abilene last weekend for the West Texas Book and Music Festival, and found - when the books were packed up and the music had ended, there was still a lot going on in Abilene. There was the Abilene balloon festival going on as well; and late Saturday afternoon, balloon owners, pilots and crews were arriving every minute in the park, pulling in with their pickup trucks, towing small trailers and setting up their balloons. A whole forest of classic tear-drop shaped balloons sprouted at anchor - gaily multicolored, bobbing gently in the air as jellyfish bob and sway in their element. 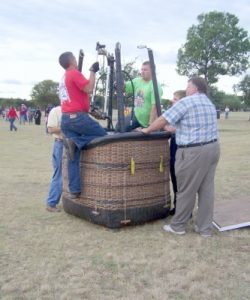 The weather was chancy in Abilene last weekend, so they could only actually launch two balloons; the evening was fine, mild and clearing, but apparently if you are going for a balloon ride, best to launch before 4 PM; it seems that landing and folding up the balloon in the dark are not a process eagerly embraced by the average recreational hot-air balloon pilot. 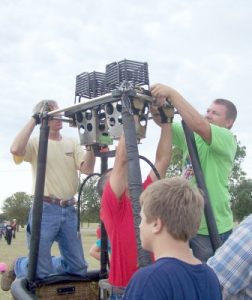 It was fascinating, watching how deftly and quickly a balloon can be deployed, though: first the basket came out of the storage/travel trailer: always a heavy-duty wicker rattan basket, although many of the ones I saw had bottoms which appeared to be reinforced with plywood. Attached the metal supports at the corners of the basket, attach the propane burners across the top of the frame, and then bring out the fabric envelope, unrolling it across the grass, and attaching the lines to the basket frame, which lays on it's side. 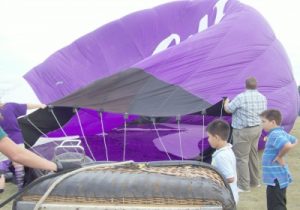 They inflate the envelope using a gas-powered super fan, first - and only when it's filled enough to stay open, that's when the propane burner comes into play with a roar like a thousand blow-torches. The blast of super-heated air from it inflates the envelope farther, to the point where it lifts off the ground; that's when the ground crew tips the basket upright . . . and the point when the balloon needs to be firmly tied up to something large and heavy. 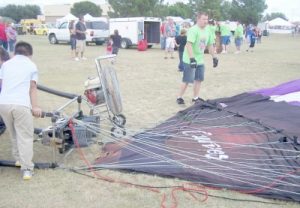 The sun was setting, as the last of the balloons were filled and made ready for an evening static display. The propane burners, lit occasionally to keep them upright and properly deployed made the balloon envelopes glow from the inside like Japanese paper lanterns. There was a live band playing all this time, mostly covers of old rock hits, like the Doors "Love Her Madly" and a whole fairway row of food vendors' trailers: everything from hot dogs, to smoked turkey legs, and cheesecake onna stick. (Cheesecake onna stick? What will they think of next - chicken-friend bacon? Oh, wait.) 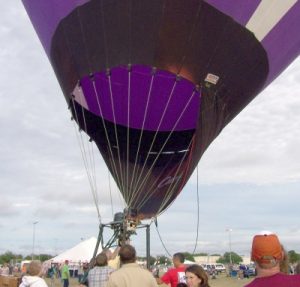 Kids were playing on the grass, running for tee-shirts being shot out of the tee-shirt cannon, dogs and their people were also wandering around . . . I couldn't help thinking that there was something still right with the world, that enthusiasts could still bring their balloons to a park in Texas, and that kids could still get cotton candy on the fairway, and the sun could set in a clear sky after a day of rain. 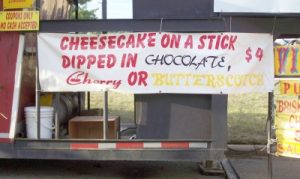 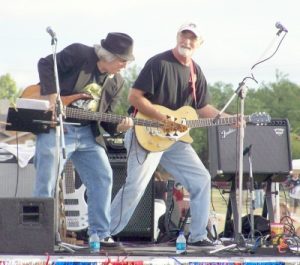