Adventures in Auctions in Frederickburg Texas 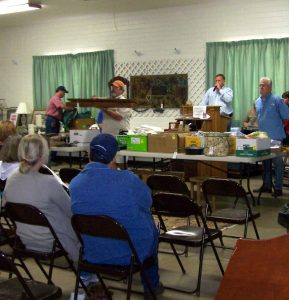 We haven't found anything good in a while, there are few spectacular big sales on the calendar, and our favorite thrift stores have been milked dry ... so last weekend we explored a new venue: an estate auction. We had seen auctions on history channel shows, and had the the impression that they were cut-throat and expensive propositions, wherein one could get easily carried away, or accidentally bid on an item by scratching your ear at an inopportune moment. Still, I don't know why we had never done this before; lack of time and opportunity, probably. 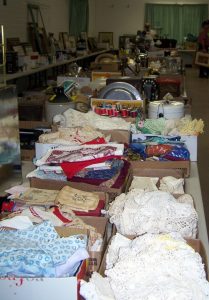 A friend of ours in Fredericksburg let us know of one, run by a local Fredericksburg auctioneer, on Saturday at the American Legion Hall. So, we toddled on up to Fredericksburg (again!) and checked out the Legion hall, which was about two-thirds filled with what was to be auctioned, including a one-horse buggy. How they got that inside, I will never know. There was an assortment of vintage furniture from the 1930s through 1970s, antique buckets and kerosene lamps, odd bits of this and that, a great many framed prints – good but not spectacular – china, woodworking tools, toys and craft-working supplies. We got there just as the bidding started. Maybe there were twenty or thirty people there at any one time; they seemed to float in and out.

The first rule we agreed upon was no getting carried away in bidding: top limit was $15, and no bidding on anything we had not examined. She registered to get a bidder number; we made a list of interesting lot numbers, found some chairs and realized that this might be a very long day. There were three ladies in front of us who were bidding enthusiastically; we assumed they were buying for an antique shop, as much of what they were getting were attractive and resalable things: framed prints, boxes of linens and doilies, a table lamp with a cut-glass base. But they bid on a number of boxes of Beanie Babies, too. 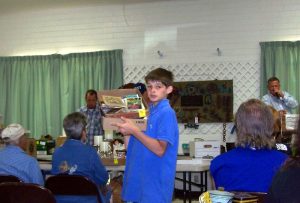 The only thing that I was interested in was a lot with a group of ink drawings by a local Pleasanton artist; don't think they are originals, they look like prints, but there were several theater programs and special issues of magazines with them; an identical theater programs is on Amazon for $45, so we might be able to recoup the outlay by selling it. My daughter got flustered and transposed the number of one of our wanted lots, and accidentally put in a bid of $5 for a box of miscellaneous table linens and kitchen towels. The only time we went to our limit was for a box with some nice glassware in it which we had both looked at but wasn't on our list. This was my fault; I got carried away, as the antique-buying ladies bid on it too.

While we were there, there were only two items that bidding got intense for: a brass hat-stand for $200 which I couldn't see there was anything special about, and a piece of folk-art, ditto. $900, and the winning bid was from a lady whose grandfather had made it; which the auctioneer knew about, and said so. Otherwise, it was a surprisingly easy-going and congenial event: most items went after one or two bids, seemingly everybody knew pretty much what they wanted and what they wanted to pay for it. Seriously, if I was looking to outfit a house with solidly nice, but unspectacular vintage furniture, I'd go to one of these small-town auctions. A rather nice upholstered wingchair went for $5, and someone walked away with a set of nice wood dining room chairs for about $100. So ... we may have found a new outlet. Although my daughter confessed to ducking down behind the antique-buying ladies' tall pile of successful bids whenever she wanted to scratch her nose...