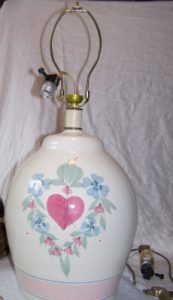 I can't remember when I discovered that it wasn't very hard to re-wire table lamps, or replace plugs and swap out one-way sockets for three-way, so that an ordinary lamp would become reading lamp. Stripping half an inch of insulation off the ends of the wires, threading them through the lamp-base and securing the bare wires around the little screws in the socket base; it's not rocket science.

More recently, I discovered that all the little bits that hold a lamp together and attach a shade are a standard size and thread. We've bought lamps at the thrift-shop or at yard-sales because they have a pretty base, and been gratified with how much better they look with new hardware and a nicer shade - and upgraded wiring. A while ago my daughter bought a pair of inexpensive 1930's era decorative lamps that I didn't dare plug in. The wiring was so crumbly; it looked like a picture of an example of dangerously faulty wiring in a brochure handed out by the fire department. New hardware, new wiring, new sockets, all the way around; amazing how much nicer they looked! 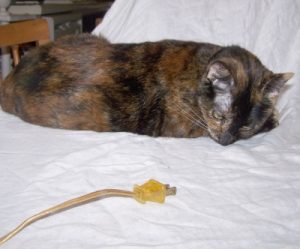 I have a whole basket full of essential lamp pieces, scrounged from various broken lamps. Never know when you will need an essential bit, you see. Since I took up the carpets and painted the concrete floors in the house, some of my favorite lamps have bit the dust - including one made from a blue and white Korean bowl I spotted in a market in Itaewan and had converted to a lamp. Not to fear - I salvaged all the non-china parts, the bases, tops and shades, with the socket and all the metal bits.

Almost at once, my daughter, the Queen of All Yard Sales, spied three replacement lamps, at a San Antonio neighborhood garage sale - all blue and white painted china bases, all vaguely Oriental in design, in good shape and all three for a mere pittance. One of them most particularly resembled the Korean bowl, and as it was approximately the same dimensions, I thought I would be able to remove the brass base and top to it, and replace them with the wooden base and fittings from the Korean lamp - and I would have something that came very close in looks to it. 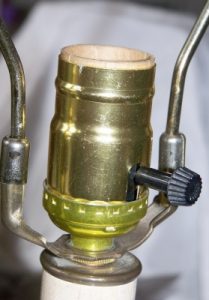 Only the hex-nut that held the whole thing together at the bottom was apparently tightened on at the factory by Godzilla himself. Not even with a crescent-wrench could we get it to budge - and Blondie and I tried separately and together, and with a spritz of liquid wrench.

There was only one thing to do. And that was to take it to Pep Boys. Really, any garage would have done, but Pep-Boys was open on Sunday. Where else do you find the strength and the technology to separate metal bolts from the threads they are apparently frozen onto, than at an auto mechanics? But the manager did look at me and ask, warily, "This is at your own risk of course. It's not a priceless Ming vase, is it?"

"Five-dollar yard-sale special," I said, "Have at it." It took one of the mechanics about two minutes and all the other mechanics came to look, shaking their heads.

The manager did say afterwards that it was the weirdest request that anyone has ever come to Pep-Boys with.

(Some pictures of what an easy job this can be. Of course, I had feline supervision. The lamp pictured was picked out of a trash can - because the cord was damaged, and the light socket knocked askew.) 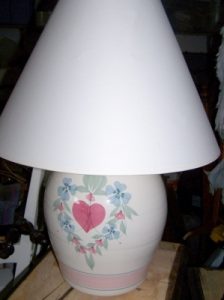 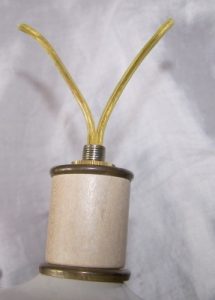 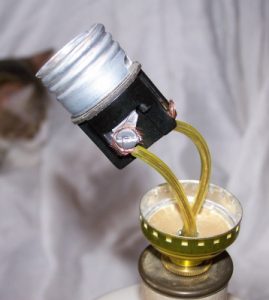