An Evening with the Authors in Lockhart

Evening With the Authors 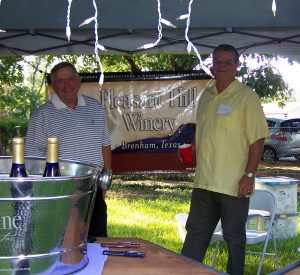 That was a wonderful time, although I didn't really get to meet any of the other authors. Readers of books and local supporters of the Eugene Clark library got to purchase books and talk to the authors, while sipping wine and nibbling on a scrumptious array of finger food, cheeses, sweets and whatever, provided and served by students from the Austin Community College Culinary Arts program. Each of us authors had a table with chairs around it, scattered through an artfully planned garden at the back of one of Lockhart's' stately ancestral mansions. Shade trees alternated with spaces of lawn, and pavilions trimmed with icicle lights – which sheltered the buffet line, the dessert table, the booth where wine was dispensed, (courtesy of Pleasant Hill Winery) and the table at the very back of the garden where books were sold.

The nearest I came to meeting another author – Gretchen Rix – was when her sister came and sat at my table, dispensing cleverly decorated cookies. In the right hands her cookies could be the next cupcake fad. We enthusiastically encouraged her to do a book, too. We took several home with us – the decorated cows were fragile and fell apart, but the toilet-paper roll (don't ask!) is still intact. (Note from my daughter to her – Do the Cookbook!) On the dessert table was a tiered dish of cookies decorated to look like the cover of The Cowboy's Baby, an endearingly cute way to market the book, especially to those attending the function discouraged initially by the line at the buffet table who decided they would rather eat dessert first. I was one of them; the dessert and cheese table was almost directly across from me. Fresh fruit, crackers and cheese served me well, since I could eat them in bites between talking to people, sequentially taking the chair closest to me, and asking about . . . well, really, all sorts of questions. 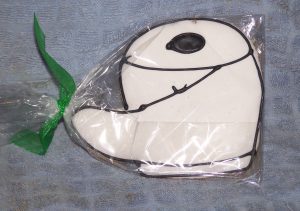 I had only one opportunity to give a mini-lecture to a full table: how important it was to know our history, how I came to write historical fiction as a way to teach people about it . . . and the best way to teach people that history is to make a ripping-good and readable yarn (while still being historically accurate!) I also had the chance to face one of my greatest private dreads – a descendent of a villain. Ever since the Trilogy came out and I began doing book events, I've met people descended from those historical figures which I wrote about in it: C.H. Nimitz, Dr. Keidel, Herman Wilke, Louis Schultze and others. Those descendents I have met have been pleased with how I 'wrote' their ancestors, although one sniffed that she had never heard of CH Nimitz ever being called 'Charley'. Anyway, one of the attendees was a descendent of the notorious 'black hat' J.P. Waldrip . . . and as she whispered to me, upon departing from the table it appears from the family records and memories – that he was pretty much as I wrote him. I love it when I get things right – even if it comes through instinct.

Three hours – a long time to be "on" even though an opportunity to talk and answer questions from readers and how I came to write them that is so treasured. We came away, refreshed and exhausted, having sold out all copies of Daughter of Texas, and half the stock of the 'book as thick as a brick', the Complete Adelsverein Trilogy.

That was my weekend – yours?