As the Topsy Turvy Tomatoes Continue to Revive the Garden

Continuing to Revive the Garden 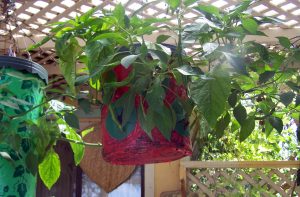 In spite of the continuing drought – only broken last week by a sudden but very welcome thunderstorm – the progress in reviving my garden is advancing at a good rate. Not the entire thing, though. Small as it is, I can’t afford to restock completely with new plantings all at once. There are still some parts of the back yard which remain every bit as wrecked as they were when the pair of boxer-mixish pups that my daughter took pity on last fall got finished wreaking a path of destruction, and then three or four days of well-below-zero temperatures finished off everything that had managed to escape.

The plants that I bought, here and there – at the monthly market in Wimberley, at the Antique Rose Emporium and at the friendly neighborhood HEB, to replace the lost ones are mostly thriving, although something that has a taste for nibbling on the roots of the airplane plants has eaten one of them down to the sprouts. I don’t know what it is, but it has sharp teeth, and can apparently rappel down a metal hanger to the baskets where I had split up a huge pot-bound one into three different plants. I suspect something like an opossum. Fortunately, it left the other two alone. 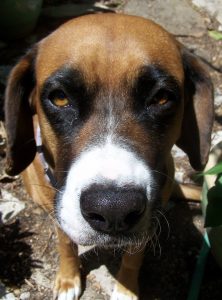 The basil is thriving gloriously – there is nothing like fresh basil in the summer. The best and most simple summer salad is a dish of sliced fresh tomatoes and rounds of soft mozzarella cheese, sprinkled with fresh-cut leaves of basil and a dash of olive oil. With luck, we may be able to have all that, from out of our garden and our own cheese-making vat, although I fear it will be decades – if ever – before we can generate cold-pressed olive oil from the little olive tree planted out in front. 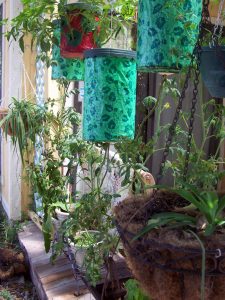 The tomato plants – six of the poor spindly things, rescued from the marked-down shelves at Walmart and just about dead at that – were carefully planted in the topsy-turvy tomato planters that my daughter also scored from the marked-down shelf at the HEB. They grew down, and then up again, astonishingly bushy – just as the exhuberantly glowing advertisement material which came with the topsy-turvy claimed. Over the last week, they have been putting forth little yellow blossoms, which is a promising thing and farther than I had ever gotten previously with trying to grow tomatoes in my yard here. Perhaps the personal tomato curse on me is indeed broken. My daughter looked up the breed of tomato plant – nothing special, really – just a generic garden tomato, renown for ease of care and in being prolifically productive. 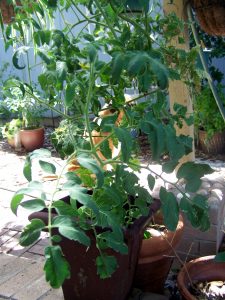 My daughter also found a hanging pepper planter on the HEB marked-down shelf; the pepper plants grow out of the sides of the planter, rather than the bottom. A couple of weeks ago, we planted that with four bell peppers and three cayenne pepper plants: they also are going great guns. A couple of them had small peppers on them when we got them, but the rest are blooming away. The planters hang from the edge of the back porch – and I have arranged a number of smaller plants in pots on the ground below, so that the water dribbling out of the planters will refresh the plants below.

And that’s where my garden stands this week – what about yours?