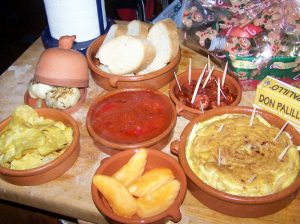 My mother just sent us a basket of gourmet foods from Spain as a Christmas present for us again, since last year's basket from La Tienda was such a big hit. We loved living in Spain, loved the food, adored grazing from the little plates – the tapas – invitingly set out at bars, loved the fact that a 'bar' in Spain was usually not just a seamy joint serving spirituous liquors to an assortment of skeevey low-lives. A bar in Spain was much more likely to be a kind of café, coffee shop and neighborhood club-house, the place housing the pay phones, ATMs, video game machines, and clean bathrooms ... and oh, yes – serving snacks and alcoholic drinks of every possible description. It also mildly freaked out many Americans upon discovering that many gas stations on the highway – or autopista – also had very well-stocked bars. Make of that what you will.

Mom's Christmas basket again revived memories of some wonderful food, although it did not, for instance, include any jamon Serrano – that dried, cured ham which was available practically anywhere, and was a component of so many dishes. It was a rare rustic restaurant which didn't have a couple of whole curing jamons hanging from the ceiling beams, and a rare bar that didn't have one on hand for making the little tapas snacks from, with half the flesh shaved away in tissue-paper thin slices. The Spanish equivalent of Costco or Sam's Club had them for sale in a special section ... which it must be admitted, always smelt faintly of cheesy gym socks.
But there was one dish made with jamon Serrano which I loved, and only had once, in a restaurant in Santiago de Compostela to celebrate having followed the old pilgrim road from the Rioja to Asturias – and that was a dish of baby artichokes cooked with jamon. I went looking for recipes for it, and found one which calls for one lemon cut in half, 1 and ¾ pounds tiny baby artichokes – the ones barely the size of a small egg, before the chokes inside have gotten coarse and inedible, ¼ cup of olive oil, 3 Tbsp minced fresh parsley, 8 thin slices of jamon, also chopped, and salt and pepper.

Fill a large pan with cold water, and squeeze the lemons into it, adding the squeezed lemon halves. Trim the inedible stalk and tough outer leaves from each artichoke, and cut each in half, putting them into the lemon-water immediately; this will prevent them from turning brown. When finished processing the artichokes, put the pan on the stove, bring to a boil and simmer for 5 or 6 minutes, until the artichokes are tender. Drain, discarding water and lemon halves. Pat the artichokes dry. Heat the oil in a frying pan large enough to hold the artichokes in a single layer. Arrange the artichokes cut-side-down and fry for 5 minutes. Turn them over and fry the other side for two minutes, then add the jamon Serrano and fry for another four minutes, until the jamon is crispy. Place in a serving dish and top with the parsley and ground pepper. Oh, if it were only the season now for baby artichokes, and if Mom's gift basked had only included jamon Serrano – I would definitely fix this for our Christmas Eve tapas supper!