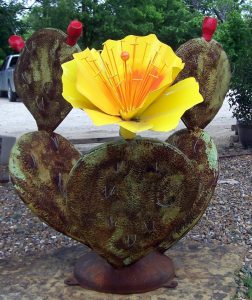 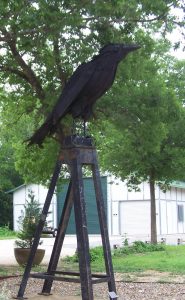 So we had noted some ... well, some outdoor works of art, arranged in a landscaped space on River Road next to the Ewe and Eye yarns and handicrafts establishment, and last week we stopped for a few minutes to check it out up close. It's the Texas Treasures Fine Art Sculpture Garden– they have a post on the Boerne Chamber of Commerce's Facebook page. While Texas Treasures Fine Art Gallery does have an indoor and roofed over fine art gallery on Main Street, it looks as if some of the larger and more weighty pieces of sculpture have been put on display out in the open air ... which is about the only place that one can visualize some of them, notably a huge west Texas landscape called ... well, Landscape. 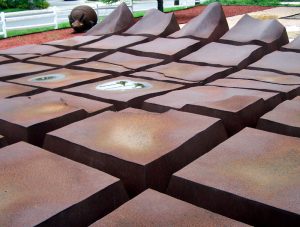 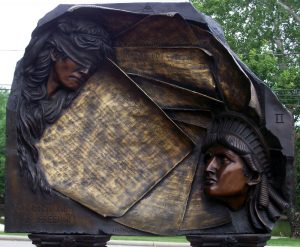 So many yards of metal squares, set together ... and yep, that's just what it looks like from the air; mostly flat, a little rolling, with depressions that collect rainwater in season, moving up into a range of peaks on the far horizon, neatly crossed by a regular grid of roads and fences. It's a modern piece, which I usually don't care for at all, but it is strangely appealing, and outdoors is just the place for it. Presumably the whole place is under camera surveillance, 24-7, and since shoplifting any of the pieces would involve a heavy-duty winch, welding gear, a reinforced vehicle and a couple of hours work – they're probably pretty secure. 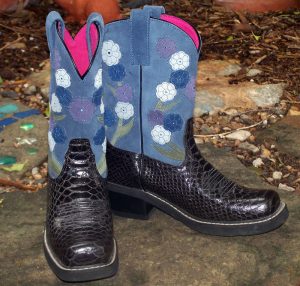 I also liked the enormous panted metal cacti – with red flower buds the size of D-cell batteries, and yellow blossoms like enormous bright bridal bouquets. That particular artist, Joe Barrington, apparently loves to sculpt outsized pieces and to use interesting and useful metal junk as the raw material. One of his famous pieces is a full-sized pickup truck, with a gargantuan metal catfish filling the back and draped over the cab. That one is not here in the sculpture garden – but an enormous brooding metal raven on a tall perch is back in one corner, and I could imagine it solemnly croaking, "Nevermore, y'all!" I like that kind of playful sculpture, like the raven, and the blooming cactus. My dad, who adored messing around with a blow torch and assorted bits of scrap metal would have loved it too, and likely would have had a go himself at astonishing the neighbors with a gigantic metal fish in the back of a rusty pickup. Whatever amuses people to look at, and keep it out of the landfill is certainly a commendable and refreshing attitude for a modern artist. I've just seen to darned much of the incomprehensible and ugly sort – both the privately purchased kind, and the kind that is left to adorn public squares in the last half of the 20th century. Look, I didn't mind the concrete, metal and glass Bauhaus cubes so much ... but why did they have to leave a fountain in the plaza in front of it with an enormous concrete t*rd in it?

So, no – Mrs. Hayes' little girl Celia is not, or ever has been a fan of the usual run of modern art, nor of strictly kitsch like Thomas Kinkade, either. But the bits and bobs in the Texas Treasures sculpture garden is fun and funny, and some of it is old-style (19th century style) meaningful, without clubbing yourself over the head, or having to have a masters' degree in 20th century art and cultural appreciation to really like and/or understand. Check it out, next time you're in Boerne. And by the way – the Riverside Market – in the Shell Station on the corner of River Road and Main Street? They have just finished redoing the inside of the seating area, and added a covered outside deck for your dining pleasure. The BBQ chicken and the brisket are the food of the gods, people, the food of the gods.