Christmas Baskets for the Neighbors

Sing We Now of Christmas 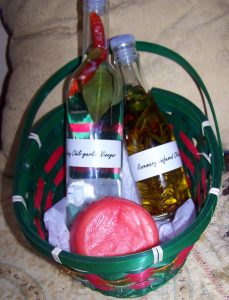 And of Christmas presents, and decorations on the tree and mailing out the cards and all ... we really don't have to go shopping actually, since we do that throughout the year. What we do at this time of the year is to turn out the contents of the 'gift closet' – where we had stashed all the things purchased throughout the year with an eye towards this season, wrap them suitably and send them on their merry way. That done, we turn to the entrancing question of 'what to give the neighbors' for Christmas, or more particularly, those neighbors who are also friends. Something to eat is the standard, but fruitcake is ... well, does anyone actually eat fruitcake? Cookies are ... well, everybody does cookies, and I am beginning to suspect that no one actually eats them either. I am pretty certain that no one ate them that year I did gingerbread cookies from an old Joy of Cooking recipe and they came tasting something like ginger and looking like what we have to pick up after the dog.

Fortunately for our neighbors, there's a whole world of home-made edible possibilities out there, and this year, we've been exploring them. We decided upon gift-baskets of flavored olive oil and spiced vinegar, with a mini-wheel of home-made cheddar cheese, and a small loaf of home-baked fresh bread. (I, in a moment of backing frenzy some years ago, bought a number of mini-loaf pans.)

The recipe for the flavored oil is fairly straight-forward: three or four fresh springs of rosemary (picked from the bounteous rosemary bushes growing in the front yard) washed and carefully dried, and ¼ to ½ teaspoon of dried and crushed red pepper flakes. Place in a bottle, and fill to near the top with good quality olive oil, heated until just barely warm. Cork the bottle, and store in a cool dark place for at least a week. (Refrigerate after opening.)

We did garlic and chili pepper vinegar, also. This recipe came from Sunset's Home Canning recipe book. We used dried red cayenne peppers from the pepper plants which grew so lavishly in the topsy-turvy: four to six dried peppers, three to four dried bay leaves, and three fresh cloves of garlic per bottle, filled to the top with white wine vinegar. As with the oil, store in a dark, cool place before use, and refrigerate afterwards. The very best deal on the small bottles that we chose for the vinegar and oil was at Home Brew Party, on Nacogdoches and Judson.

The homeade cheeses were made from a recipe for farmhouse cheddar, in Ricki Carroll's Home Cheesemaking, but instead of making one large wheel, I made three little ones. But if you don't want to venture that far into D-I-Y territory, any small flavorful cheese would do. My daughter, the Queen of All Thrift-Shopping found inexpensive baskets to hold it all at the Dollar Tree, but really, any attractive container will do – even just a plain brown bag with a checkered napkin. So, our gift baskets will look pretty much like this – don't you wish you were our neighbors?

For all your San Antonio real estate needs