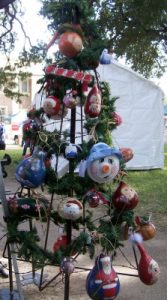 How They Do Christmas in Texas 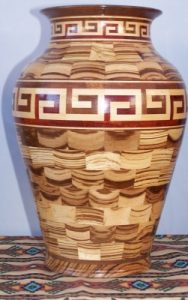 Of course they do it full-out all over South Texas; but especially for town celebrations like Christmas on the Square in Goliad, Texas, two hours drive south of San Antonio, on a clear cold morning with everything – including the windshield of the car white and furred-over with frost. It was glorious, though, to see the sun come up, and arrive in Goliad – which has to boast the most-exuberantly ornamented Beaux-Arts-style courthouse building around.

Christmas on the Square was two days of local artists and crafters, food-booths purveying everything from hand-cut home-made potato chips to gorditas, hamburgers and meat-onna-stick, live music, a dog costume contest, and of course . . . the arrival of Santa, mounted on a long-horn steer. 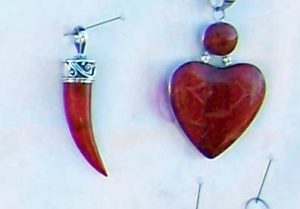 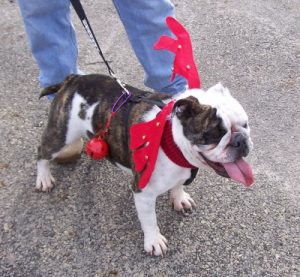 I was there because of my books; for they had a special table for local authors. What better venue to talk up a family saga, full of drama, bloody war, treachery, true love, adventure, Texas Rangers and Comanche Indians, and lots and lots of cows, than where it all began with a bang, short distance away at the old Presidio, where the survivors of Colonel Fannin’s company of Texians were led away and executed by Santa Anna’s soldiers, in 1836. 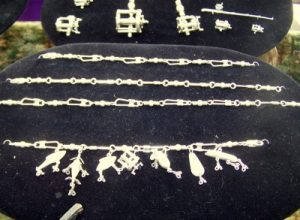 In between time, my daughter and I took turns, walking around the square admiring various wares, quite a lot of which were very fine, indeed. If I had sold more books, I most likely would have bought more than I did; even so I was seriously tempted, if not downright amused.

The Turn Works does barbeque tools – set with handles made of deer horn – forks, ladles, combination salt-and-pepper shakers. According to their card, they will also do your custom design. Alas, no website – but MC Enterprises does. They produce original jewelry; silver, set with shell, coral, semi-precious stones and mother of pearl. I liked their pieces very much, because they pulled off the neat trick of being original and of good quality without being flashy, and affordable without looking cheap. 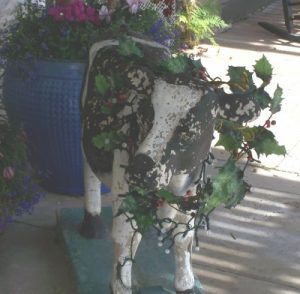 Another vendor, Jimmey Luckey of Round Top also does sterling silver jewelry – but charms, fishing lures and accessories in perfect, working miniature. He has an e-Bay store, but I couldn’t afford the piece that I wanted – a tiny Colt revolver in silver with inset horn grips. Gaylon Harvey, of Blessing, 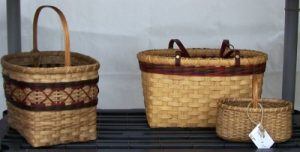 Texas had shelves of turned wood ornamental platters, boxes and vases, which were purely ingenious, when you think of how carefully slips and cubes of wood must be glued together, and then turned on a lathe. Baskets by Debi, and benches and stuff by Pee Wee’s Metal Art, of Bloomington, Texas, and painted gourds by R & R Creatives (who were from Goliad, and so didn’t have a long drive home afterwards!) I could have come home with several times what I did, although I had to warn my daughter off the Goliad Pet Adoption booth as there were a number of totally charming dogs and cats looking for likely humans. 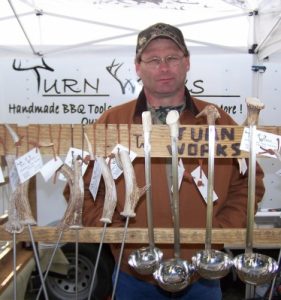 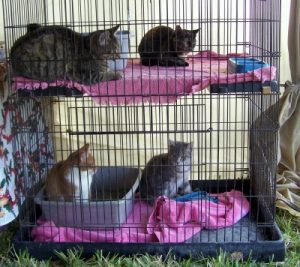 The high point of the afternoon, after the arrival of Santa and the entourage, was the pet parade: yes, it’s that time of year to totally humiliate your dog by dressing them up as Mrs. Santa Claus, the Grinch who stole Christmas, or as a reindeer – but there were pet owners who chose the tasteful, minimalist approach. All in all, a wonderful and exhausting day; Goliad’s public Christmas festival may be over, by many towns and localities in easy driving distance will have activities, festivals, displays, and market days over the next two weekends. I can’t promise that any of them have Santa arriving on a long-horn steer, though.

Full schedule of activities for Johnson City Christmas Activities
Fredericksburg schedule of Christmas events
Posted in Other
no comments yet
Comments on this entry are disabled
Like or Share
Loading likes...