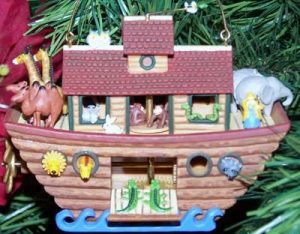 As of last weekend, we couldn’t put it off any longer. It was well past time to haul the tubs of ornaments out of the garage, and put up the Christmas tree. My own ornament collection is vast and eccentric. I’ve been celebrating the season on my own, more often than not, since 1977 – and have all the memories of where I acquired them. 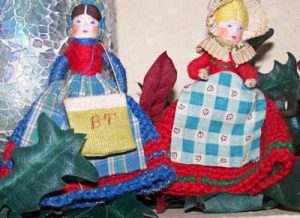 For some reason, I had these two little yarn-doll ladies, with colorful crocheted skirts: they came from Denmark, through my Great-Aunt Nan. They are the oldest among my collection: second to them are about thirty Styrofoam balls, covered with velvet or felt, trimmed with lace, gilt ribbons, fake seed-pearls and jewels. I made them in 1977 to adorn the little plastic tree in my room in the barracks in Japan. They have proved fairly indestructible, being able to stand a drop to a hard floor. 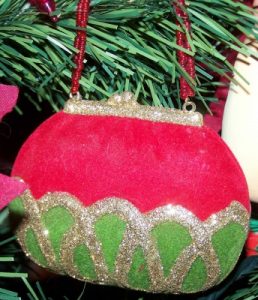 During the 1980s, I bought a single box of ornaments from one of the high-end catalogue retailers every year. The paper-mache globes covered with red and green curlicues, the stuffed teddy-bears with little scarves, and the vintage wooden airplanes are from that period. The airplanes looked especially fine, hanging from the ends of the branches, as if they were whirling in some endless tree-shaped dog-fight. The terra-cotta ornaments from Portugal which look like ginger-cookies are from that time, and so are the wooden miniature musical instruments. 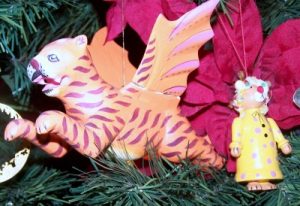 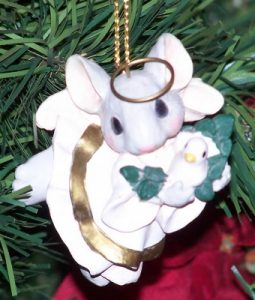 I have a handful of Anri flying angels, bought when we passed through Rome on our way to Spain; I drove a bright orange Volvo sedan onto the car-ferry from Patras to Brindisi, and wandered all across Europe, accompanied by my then-four year old daughter. 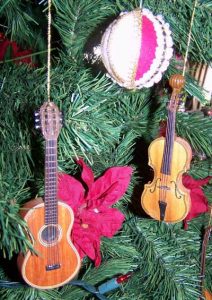 The dozens of traditional German wooden ornaments are from the 1990s. Santas on the backs of whales, or in the basket of a dirigible, angels and little sleds with piles of presents – those are from the six years that I was stationed in Spain, and TDY to Germany every January for a military broadcasting conference. The three little brass and glass lanterns – miniatures of a traditional Turkish lantern - came from the wives club Christmas bazaar, at Zaragoza AB. 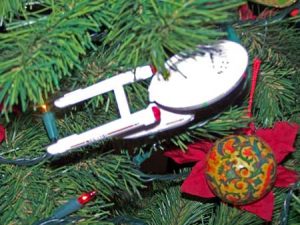 So did the wooden ornaments cut out of flat scrap of wood and painted to look like a pineapple, the traditional Colonial American symbol of hospitality. All very traditional and conventional . . . and then until we get to the three Enterprise spaceships with their tiny blinking lights. I bought the first of those when we came back to the States, the very year they brought the Star Trek ornaments out. The little angel mouse with a dove in her hands is from Utah: craft shop in the local mall. 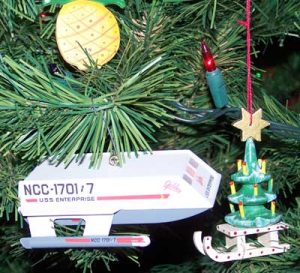 The various other Hallmark ornaments were picked up on sale, usually just after Christmas. The Noah’s Ark is one of my favorites, being so very intricate and elaborate, with two pairs of tiny animals, and a miniscule dove with an olive-branch in it’s beak, flying around and around. The little red handbag with a double string of beads for a handle – that was from a Christmas gift swap with the Red Hat ladies’s group. 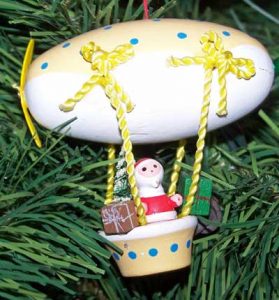 Oh, it took all afternoon to set this all up, twine three strings of lights around it, set the poinsettia flowers in all the gaps left by the artificial branches, and hang the total accumulation. But I don’t mind - it’s more than a Christmas tree – it’s a family history, a history that only families know.