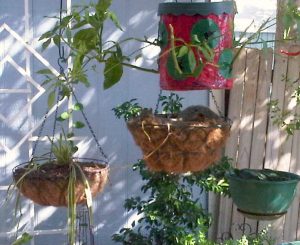 We were walking the dog this morning, when we noticed two of our neighbors deep in conversation in the driveway. The object of conversation seemed to be an occupied Hava-Hart trap, and naturally being terribly curious about anything going on in our neighborhood, we went over and joined the conversation, discovering that the occupant of the trap was a mature and deeply unhappy opossum. This was not entirely unexpected around here, actually. Possums turn up all the time – in fact, before we acquired the dogs, there were several of them that hung out in my back yard, going so far as to help themselves to the cat food that I put out for the outdoor cat. The cat, by the way, was perfectly amiable towards the opossum, as she very well might be, as the opossum had way more and very much sharper teeth than she did. 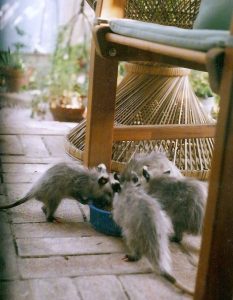 The neighbor in question was a trifle freaked about her catch, as she had actually set the trap for squirrels. This year, between the drought and a bumper crop of acorns on the numerous oak trees, the squirrels are being a particular pest. They are everywhere, digging holes in the flowerbeds, in the potted plants, and eating the roots of certain ornamental plants, and sending our dogs into noisy frenzies of excitement. The Lesser Weevil surprised one particularly unwary and slow-moving squirrel at the bird feeder the other day, and came as close to actually catching it as she has ever come . . . although I am not certain she would actually know what to do with it if she did. My daughter entertains a lively fantasy of the Weevil being so enthused by close pursuit that she actually follows the squirrel up into the tree branches . . . and then we would have to call the fire department to extract a 90 pound dog from out of the tree . . . 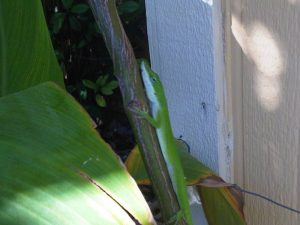 Anyway, wildlife abounds in our little patch of San Antonio home paradise; plenty of the usual suburban small mammals and rodents, and a nice selection of birds. We planted various flowering shrubs to attract humming birds, and put out feeders which draw in cardinals, wrens, sparrows and doves. One of our other neighbors has actually induced several families of woodpeckers to take up residence in their yard; most amusing to watch, they tell us. I think the most colorful yard critters are the small anole lizards. They are everywhere in the spring and summer months, bright lime green in color with delicate pink throats that they will show off by inflating them. They always seemed to hang out in the wisteria, very possibly because the lizards and the wisteria leaves are the same color.

All this wildlife is about par, for a small yard in a city neighborhood – a bigger yard and one adjacent to a greenway or open fields can count on wider assortment. Like deer: Hill Country Village – well within the 1604 Loop – supports a herd of deer and has for years. McAllister Park has deer in it, best seen in the early morning, and I spotted some deer wanderers at the corner of Thousand Oaks and Naco-Perrin one morning, several years ago, meandering towards the open golf course at Northern Hills. Even the campus of USAA has it's very own herd, which to my mind increases the likeness of the place to a stately fortified demesne on a high hill with an enclosed park around it. We might be in the city, or at least the suburbs . . . but the critters are always with us.