Decking the Halls the Rooftops and the Sidewalk of San Antonio

Decking the Halls, the Rooftops and the 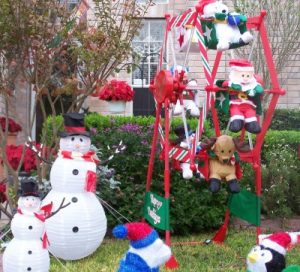 It’s that time of year again – the weather has turned cool and perfect, the scraps of Thanksgiving dinner have been put away, and those of us who felt moved to get up at 4 AM on Black Friday to score an incredible deal at a big-box retailer have returned triumphant from the hunt – so now we move on to the next seasonal ritual . . . well, besides writing the standard Christmas letter and addressing the cards. It’s time to decorate the house. And the yard. And the trees . . . and the sidewalk. 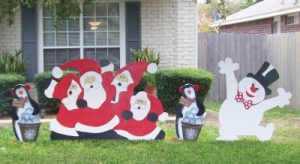 Time bring out the tubs of figures, ornaments, and inflatables, to pasture the wire-form deer on the lawn, sort out the tangle of green heavy-duty extension cords, and unwind the strings of lights. And find the little packet of extra bulbs. 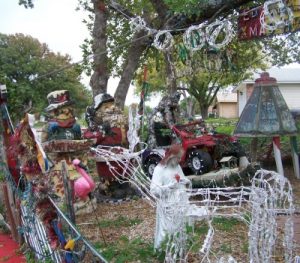 Time was, just a couple of strings of lights along the rooftop was the norm, although some people got a little ambitious and adorned the trees. Now it seems that there is a sort of neighborhood competition going on, over who can incorporate more seasonal adornments per square foot than anyone else. And this long weekend is when most of my neighbors have gotten started.

I walked around with the dogs on Sunday – already my next-door but one neighbor has strings of icicle lights uncoiled on the lawn, and a tall ladder leaning against the house. Farther down the block, another man pegs a series of giant candy canes along the edge of the lawn and walkway, linking them together with a string of lights; a stack of decorated wreaths here, another skein of lights being attached to the roof-edge by a woman on a ladder. 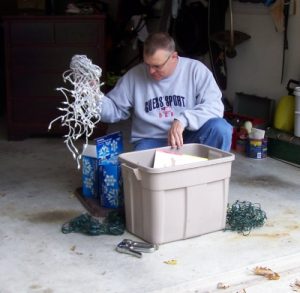 One of my other neighbors has a flock of penguins in felt caps, made from tall bleach bottles, who settle on his lawn around an igloo decorated with tinsel every year. Only a handful of my neighbors feel compelled to go the “full Griswald” – which is comforting, but even the normal run of decorating seems to be a lot more complicated than it used to be, and take much more time to install, and to break down again after New Years. Indeed, a resident in the next neighborhood over seems to have gone to the next extreme and just left everything up, year around. (Behold, a tiny portion of Ed Clark’s Christmas House!) 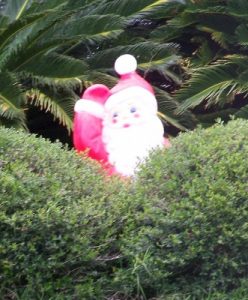 Still, I own to taking mild pleasure in the sight of it all, lighted up after twilight; and some neighborhood streets look very fine indeed, such as those in Windcrest, which makes a concerted effort every year. It’s just that I am one of those people, content to deck my own house with a minimalist string of lights and a holly wreath on the door.