The Draw of Downtown 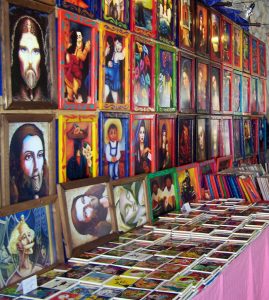 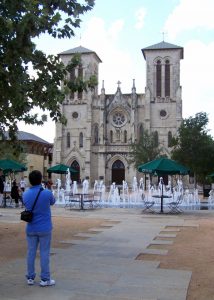 Now and again we are drawn downtown – usually not when there is a mass event involving crowds of people, expensive parking and temperatures of 90 degrees and above – but for purposes of our own, often involving visiting friends and relations, book research, or just plain curiosity. On these occasions we are reminded again of what a lovely civic jewel the Riverwalk is, even though I am certain that the noise and congestion would become tiresome for those living or working in one of the buildings overlooking it ... but still. Green water, fringed with immensely tall feather-leaved cypress trees and narrow gardens, stone walkways, little bridges and ornaments of civic art in tile, metal and stone. It is a marvel and I do not grudge a penny of my taxes which helps to maintain, support and enlarges it, yea even to the north as far as Breckenridge Park and to the south as far as Mission Espada. Let all be adorned and improved, let the gardens and fountains be extended, ancient and not-so-ancient structures be repaired and repurposed, to the greater glory of our fair city. It brings in tourists and conventions, after all – as well as the creative, the enterprising, the trendy and artistic – and as the Riverwalk is extended, brings even more of it to those of us who live here. 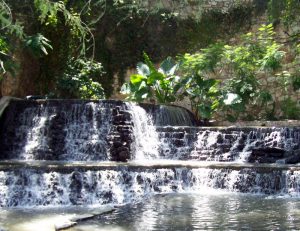 But this last Labor Day, I had a curiosity about the arts and crafts show which was supposed to be arrayed along the banks of the Riverwalk adjacent to the Chamber of Commerce. Of course, by the time that we drifted in from parking around the corner from Main Plaza and walking from there, a fair number of the arts and crafts vendors had departed. It was 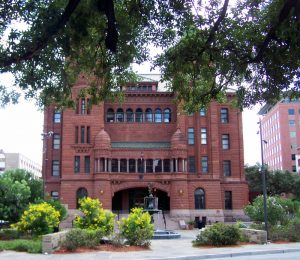 y, it was hot, the crowds were thin and the next day was a regular work and school day, so I wasn't the least surprised.

We parked near Main Plaza and walked through it on the way to the stair down to the Riverwalk. This was a project of a former mayor to make the Main Plaza a more park-like and pedestrian-friendly place than it was when I moved here in 1995. Then, if I recall correctly from calls for jury duty, it was a mean and isolated little patch of discouraged grass, a statue of St. Anthony, and a stand of oak trees, isolated by four very busy streets – Soledad, Main, Commerce and Dolorosa on each of it's four sides. Hizzhonor's original plan was to cut off all four streets and divert local downtown traffic who-knows-elsewhere. He was discouraged in this by the screams of local businesses and commuters, although it just may have been a bargaining chip. In the end, only Soledad and Main were pinched off. Now the sweep of the old square in front of San Fernando is adorned by ornamental paving, fountains, trees, a couple of kiosks, moveable chairs and tables in the European style, and very few aggressive homeless. 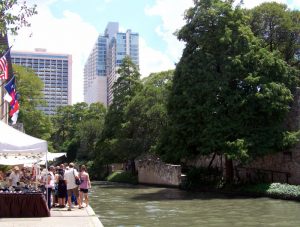 We wandered briskly along, stopping to admire a number of dogs downtown with their persons in tow, and wondered if we should bring our own next time. Eh – maybe. Of the artists remaining, one which drew our rapt attention was one featuring silver and larimar stone jewelry. Larimar is, according to the vendor behind the table, a unique volcanic stone, rather glasslike and several shades lighter blue than turquoise. It only comes from one little mine in the Dominican Republic. Then there was an artist whom my daughter had been looking for, ever since spotting the art at a First Friday several months ago, and never seen since. So – all to the best was this trip downtown. We emerged back into Main Plaza somewhat dehydrated but triumphant. That was my weekend – yours? 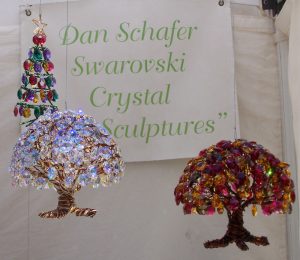 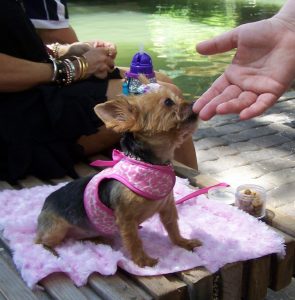