It takes a gift to find yourself on a soggy-wet mountainside on a Sunday afternoon in December in the rain, slipping and sliding in the mud with a tree saw in one hand, and leading a sniffling and sopping-wet toddler with the other.

Yep - I had promised Mom that I would bring the Christmas tree that year; she hadn't bought one as they all looked dry and half-dead already. I was stationed at Mather AFB in Sacramento and heading home on leave the next day. The plan - leave the next morning, with the tree lashed to the roof-rack of the VW squareback that I drove at the time. The Sacramento Bee had a story about a local tree farm that very day. The map with the article made the tree farm look as if it were just a couple of blocks away.

We set out bravely enough; the map opened on the passenger seat, where I could refer to it. Out of the back gate, and presently we were tooling along a pleasant country road in the mild sunshine. On the map it looked as if I would stay on this road until it intersected with another road, one with a couple of wiggles in it... into hills, perhaps? Good - the tree farm was out in the country and easy to find. Soon, empty fields and meadows opened up around us... certainly a Christmas tree farm would be in the country. I'd come to the turn-off, the road with a couple of wiggles in it very soon.

Fifteen minutes... twenty ... half an hour and no intersection. Forty-five minutes; already clear the map was deceptive about the distances. I had gassed up for a long drive the next day - but if I hadn't promised I would bring a fresh-cut Christmas tree, I would have given up. An hour went by, and the road began to climb. We were nearly to the foothills, where the clouds piled up against the Sierra Nevada.

At last- an intersection! I slowed down to verify. Yes, the right road. Pretty soon, it climbed farther and higher into the hills, into the cloud layer. I ran the wipers, hoping that the distance along this new road was not as deceptively mapped. I had not counted on two hours there and back. This had better be worth it.

At last - a sign for the farm and a dirt road leading up into the trees, just as it began to drizzle. I pulled into a parking lot; a couple of cars haphazardly stopped in a mown field around a plain red-painted shed. The door was open, there were people - but not as many as there were cars.

"Here, "said a teenaged girl at the cashbox. She handed me a tree saw, and a mimeographed sheet with sketches of the various trees with attention to their needles, and a list of prices- so many dollars per foot per kind of tree. "Cut down the one you want, bring it back here and we'll figure the price." I took the saw, stuffed the sheet in my shoulder bag. "Where are the trees?" She pointed out the door, where the dirt road continued up to the top of the hill. "Up there. They're all over. Just find one you like." 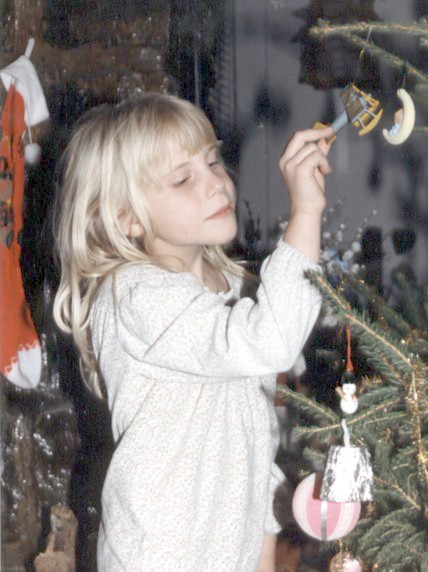 My daughter began to lag, halfway up the hill. I looped the tree saw over my arm, and picked her up. The ground was very wet, sloppy mud and slippery grass. We had coats, but my tennis shoes were soon saturated. Coming down the slope on the far side, I skidded and sat down heavily. Great - now we were both and muddy to the waist. The trees were scattered among taller trees and thickets of grass. It began to rain. I put my daughter down to walk, but she was not happy and quietly began sobbing.

We would have to find a tree, soon... close enough that I could drag it... and the saw... and my poor daughter back to the shed. Unfortunately, they were either too large, or the expensive kind. Finally - a cheaper tree, with long graceful bunches of needles. It sat on a slope, just a little taller than me. I sat my daughter down, and put my purse in her lap- "Here, watch this, for Mummy." I picked a place on the tree's trunk, about four inches above the ground, put the saw to it and went to work. Mercifully, it only took a few minutes. Then I slung my purse and the saw over my arms, picked up the tree and my daughter, and began the long, unhappy, sodden forced-march up over the top of the hill and down towards the sales hut. Some experience - wet, pissed-off, on a soggy mountainside with a lopsided Christmas tree, a wet and wailing toddler, an hour-plus drive, and a longer one in the morning... oh, Christmas tree!

When we got home, I set the trunk of bucket of water; the next day lashing it to the luggage rack for the drive south, though that may not have made much difference.

"It's so fresh!" Mom said, rapturously. "It smells marvelous! Never mind about the flat place, we'll put that against the wall, and no one will ever know... really, I wonder how long it's been since the ones in the lot have been cut! I really wonder about that, now." "You probably don't really want to know, "I said. "Merry Christmas... and you owe me $10." "Is that all?" Mom said.