A Little Shadow, Who Goes In & Out With Me

Sigh – it’s happened again. My daughter, the Queen of All Yard Sales, went out prospecting this morning to the San Antonio neighborhood on the opposite side of Stahl Road, and returned with a very cute stuffed bear (practically new!) who sat in his own (cheap but cute!) upholstered armchair, which was for sale for the OMG-have-to-have-it price of a whole $3! 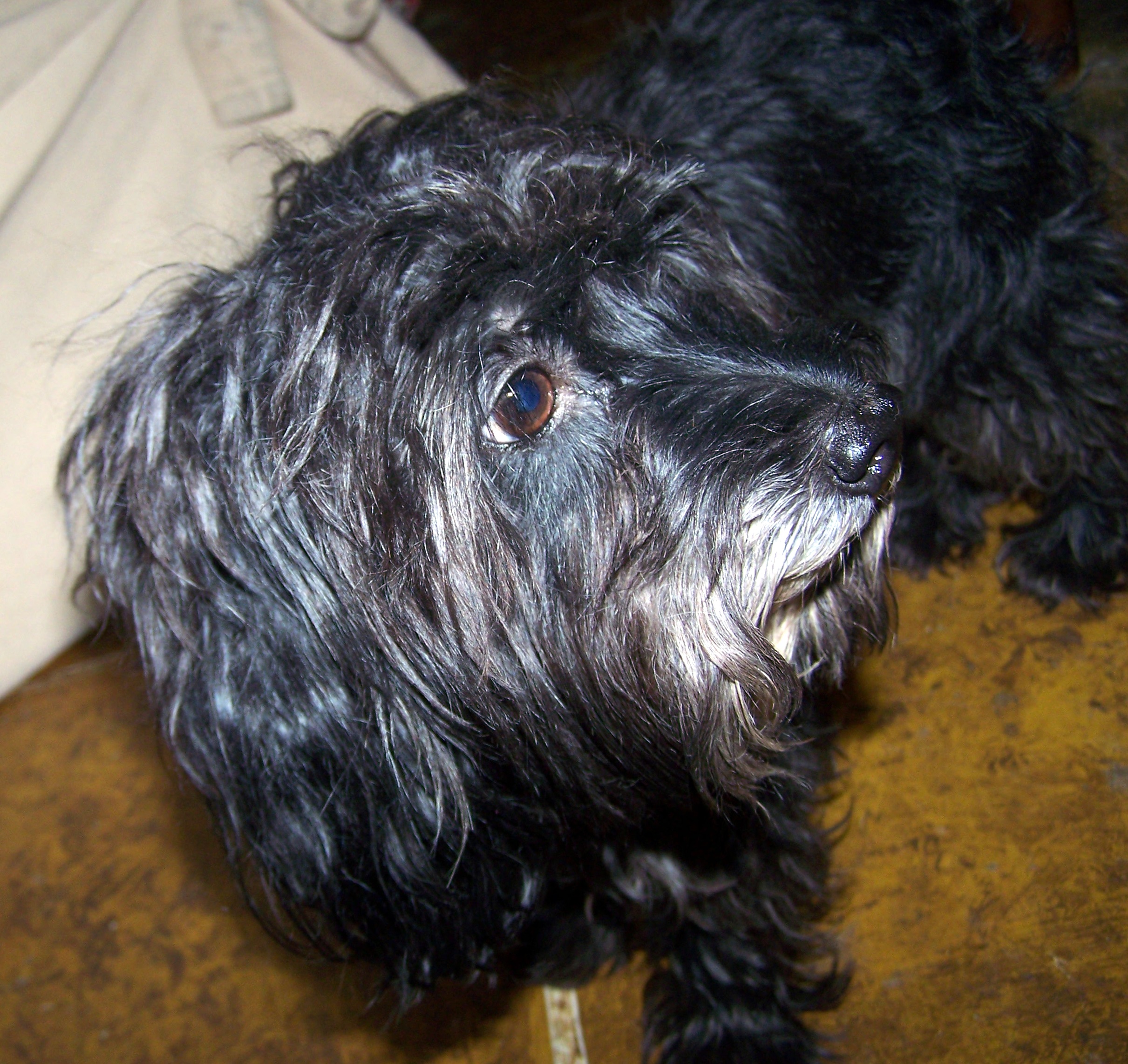 And there was another item, accompanying her, upon this expeditionary trip into another neighborhood: something live, black-furred, wiggly and friendly. A small and relatively well-kept dog, about twenty pounds at a guess, somewhat gray about the muzzle – which the Queen of All Yard Sales found, running around in the street, a heavily-trafficked suburban street adjacent to the yard sale – a venue which could easily spell death to small dogs.

We’ve rescued a number of dogs, in our residence here – mostly lost, and now and again dumped.  We can read the whole sad story in their demeanor and behavior. Someone gets a cute puppy, puppy grows up, becomes a handful and not so cute, someone decides not to want to cope with it any longer  . . .  short drive to a likely neighborhood, a quick dump out the door  . . .  and the problem dog becomes someone else’s problem.

I wish we could put people like this in the stocks, so we could throw rotten vegetables at them. Better yet – dump them in a strange town, completely naked and gagged, and let them fend for themselves and find their way home. Dogs are  . . .  well, they are dogs. Thousands of years ago – wolves who decided to throw their lot in with us, to look to us as the leader of their pack of one or two. The love of a dog is the only kind of love that money buys – and sometimes a love that is horribly misplaced.

Not by the little black doggie that my daughter brought back today. There is a  . . .  well, call it an air of those dogs who are truly lost, who have someone who loves them, is doubtlessly missing them; or just discovered that they are missing, and are looking frantically for them. Such are older dogs like this one; well-kept, with manners, house-trained, affectionate and relatively calm; a dog that someone, somewhere is looking for, with increasing degrees of panic. We have got a sense about this, through long experience. The demeanor of the dog tells you so much about where they came from.

Why, oh why do we seem to undertake these rescue missions on weekends? No collar, no tags. He (definitely he and neutered) is about 20 pounds, black fur with a grizzled grey chin. Mixed breed – almost certainly part Shi-Tzu, for the body conformation is the right size and confirmation, although I think there must be something else in the genetic mix. He has a long muzzle, not the google-eyes of a Shi-Tzu or Peke. I am guessing maybe toy poodle, maybe a bit of Scottie, or some kind of terrier. He is inclined to be glued to me – which is what lap-dogs do, they want to be near their chosen person – so I deduce that his person is most likely someone of about my age. If he is chipped, we won’t be able to know until Monday.

If he had tags, we would be able to call his owner; if a rabies tag, then we could call the veterinarian who issued the tag and get a line on his owner;  again – a weekend. We can’t even call Man and Beast, to register that we have found him until Monday.