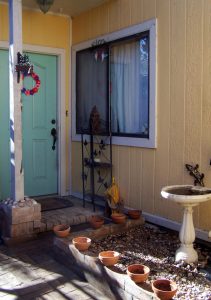 In between those days of bone-chilling cold, my daughter and I finished up the raised flower-bed part of the entryway to the house this week. The stump of the photinia is buried deep in garden soil, home-brewed compost, with a layer of weed barrier on top of that, and a thin layer of river rock on top of that. We visited Lowe's over the weekend and were sorely tempted – and succumbed to several interesting varieties of day-lily and gladiola corms, and a rose-bush. I might, at a later date, put in some lavender plants, as the soil mix in the raised bed is just what they like; sandy, easily drained, full of good nutritious compost – the very opposite of the heavy clay which occurs naturally around here. 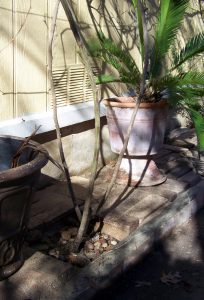 We raked in some good rose-food, planted the corms and the rose bush – and for good measure, my daughter scattered seeds from of a good handful of packets of annuals around the edge of the weed barrier, covered it all in river-rock ... oh, we'll need to go and get a few bags more of the river rock. We always under-estimate these things. The tools are cleared away, the empty sacks removed and the sand swept up – and the front entryway now looks pretty good. Not Parade of Homes quality, but still pretty good. There aren't quite enough bricks left to continue paving over the narrow little flowerbed which runs along the side of the house between the walkway and the exterior wall of the garage. This has always been an annoyance for me; when I first bought the house it was filled with ivy. It took five or six years to eradicate the ivy. Now there are a couple of rosemary bushes, and a climbing rose that goes along the house wall – but the base of the bed always looked a mess; leaves blew in and it was a chore to rake them from underneath the rosemary. We'll pave it with the last bricks, augmented with concrete pavers, leaving small square areas filled with more gravel around those established plants – which ought to reduce the mess-quotient by several degrees. 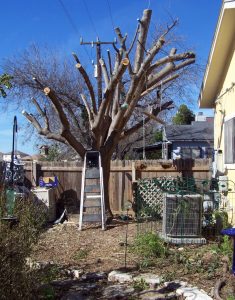 The cold snaps this winter have done a pretty thorough job of killing off everything that wasn't sheltered in the greenhouse. Likely we will have to start all over again with Bell and jalapeno peppers. Among the other temptations in the garden section at Lowe's was a good assortment of seed potatoes. I'm hoping that when the weather lets up a little I can plant them – and do better than last year. I'd like to eat more produce from my own garden than I buy at the grocery store, but so far, the only thing that flourished regularly were salad greens.

Potatoes weren't the only temptation in the spring starts, seeds and roots – I committed to another grape vine; this one I intend to train up on wires strung between eye-bolts screwed into the back fence. My neighbors with the beautiful garden had done this; why not go vertical, in a small enclosure. My daughter bought a blackberry vine – and that will also go up on the trellis wires. Finally – among the stock at Sam's Club last weekend; young fruit trees; apple, apricot, plum and peach, for a very reasonable price. Yeah, I bought two of them; when we lived in Utah, it seemed like every house of a certain age had at least one bearing fruit tree in the yard. With the mulberry cut back, I think there will be sunshine enough for the peach and plum saplings. So, that's my plan for this spring in the garden...