The Shape of the Porch to Come 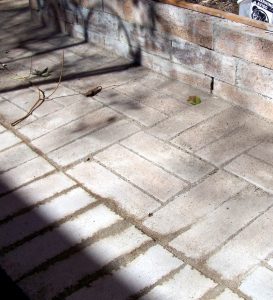 All righty, then – last week to Lowe’s for two bags of mortar mix and an inexpensive bricklayer’s trowel, so that we could complete two segments of the porch project. For reasons known only to the original developer, the basic plan of my house (and a handful of other small garden cottages in Spring Creek Forest) were built with the front door actually about half-way along one side of a long narrow house – with a kind of square divot indented into the side. A third of a divot was made into a small, covered front porch and the rest just left open. Most people chose to make it into a flower bed, although the whole thing in concrete would have made a generous porch with wide steps going down to the walk.

The original owner planted a photinia in it, which eventually quite overwhelmed the raised flower bed that I made of that space and turning the room behind it into a cave. Finally I had the tree guys take the whole thing out, cutting the stump back to ground level. My daughter and I re-vamped the raised flower bed a couple of weekends ago, laying most of the bricks in a bed of leveled sand – but those along the edge needed to be mortared together, for stable footing, and three courses needed also to be made into a low wall to surround a smaller raised bed. 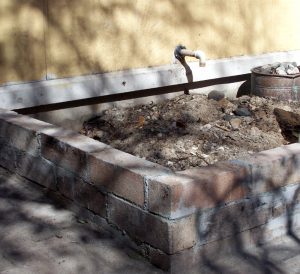 So, we split the effort; my daughter did the edge, and I began on the low wall. This is one of those things which looks so easy when the professionals do it, but it is possible to do it yourself with satisfactory results … although it will be a bit messy at first, and likely every professional bricklayer in town will be rolling on the floor, laughing uncontrollably at your efforts. Spraying down the bricks first with water will make the mortar stick to where it should, and a certain degree of obsession-compulsion when it comes to keeping things in a regular, tidy, symmetrical pattern will come in handy. So will a level and a mallet; the first to ensure that the bricks are indeed level, and the mallet for whamming them into place. Sprinkle with water, spread with mortar, wham the next brick into place, scrape off the excess mortar … and repeat as needed, several hundred times. Let set, sweep away the excess sand and crumbs of mortar, and there you are.

We plan to fill the raised bed with a mixture of sand, compost and garden soil, topped with gravel to keep the rainwater falling from the roof edge from splashing dirt onto the side of the house. Since it faces south and is a very sheltered space, we’ll plant it with sun-loving, flowering plants like lantana, salvia and Russian sage. There’s a concrete bird-bath to go in the middle of it – just about where the stump of the photinia will – we hope – peacefully will rot away. I also have a number of low, rectangular terracotta planters that will fit nicely at the foot of the raised bed – that’s where the mixed lettuces and salad greens will grow, as soon as it is warm enough to set out seeds. And that’s the plan – next weekend should see it all complete.