Planning for the Garden 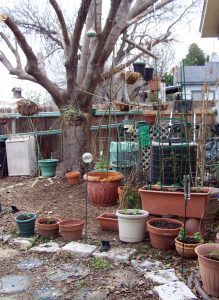 Once more into the breach, my friends; with 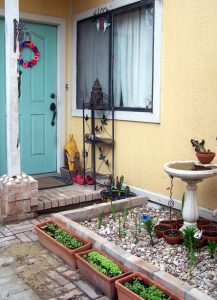 the date of the last predicted frost in South Texas historically being in mid-March, it's time to get started with vegetables. Indeed, the local HEB began putting out vegetable starts late in February, when the temperatures became so balmy and mild that I was seriously tempted in indulge – after all, $1.00-1.25 for a four-inch pot with a healthy young plant in it? Yes, I was eager to enter the fray once again, after last years' disastrous tomato-growing debacle. It was too hot, too soon, and those plants which did manage to bear fruit ... well, the rats got to them. Not just the tomatoes, but the fresh young sprigs, and the leaves of the pepper plants as well. 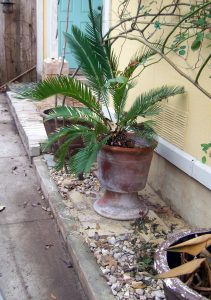 The very Sunday afternoon that I finished setting out the various starts from HEB – even as I was assembling the patent tomato cage, the cold front blew in. There I was, working in jeans and a short-sleeved shirt on a warm and muggy afternoon; we had even been running the AC, since it was so warm. Then, suddenly, I felt a cool breeze, as if the AC had suddenly kicked in outside, and within ten minutes it felt as it it had dropped fifteen degrees. We rushed the newly-planted tomato and pepper starts into the greenhouse, along with the tenderer of the potted plants, but to no avail. The water in the birdbaths was frozen hard the next morning, and the newly-planted lantanas by the walkway were pretty well frost-scorched. Even the new green leaves on the ash trees were hit. Curiously, the long containers of lettuce and salad greens by the new flower bed at the front door as well as the bulbs in it – all of which had just sprouted in the last week or so -- survived just fine, under cover of a heavy blanket. But everything else, even the pole beans which had just put up two or three leaves ... alas. 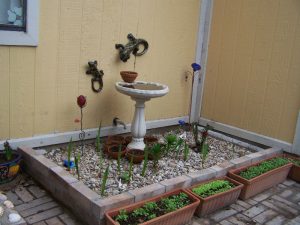 So they are not kidding when they tell you how fast a cold front can blow in. And they also were not kidding about the last frost being in mid-March. Fortunately, I still had plenty of pole and bush bean seeds, so I've only lost a couple of weeks as far as they are concerned. And on Friday, we bustled over to Rainbow Gardens, which offered row upon row of tomato starts, plain, fancy, heirloom, large and small, early and late. I've gotten half a dozen of them into the grow box, and the rest must wait for a bag of fresh potting soil to go into the topsy-turvy planters. I'm also figuring out a way to do space-saving and self-sustaining raised beds, rather than depending on the compost bin and my vast collection of large pots. There's a kind of raised circular bed called a key-hole garden, with a working compost heap in the center, which looks very attractive and useful, but being circular would take up too large a chunk of the back yard. Another suggestion was a series of low columns about the diameter of fifty-gallon drums, made of chicken wire lined with straw or even weed barrier, with compost working in the bottom two-thirds, and a layer of potting soil on top with plants growing in it, which would be a bit more practical for me, space-wise. And that is my week in the garden – yours? 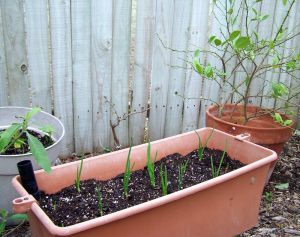