You Gotta Have Heart! 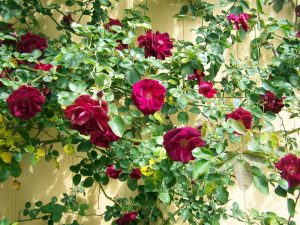 Ah, yes – Fiesta Time is here once again; San Antonio's very own Mardi Gras but with more couth. Or at least we like to think so. Around here, when the floats with the Fiesta female nobility pass, the crowd shouts, "Show us your shoes!" and not anything more revealing than that. Of all the scheduled events during a nearly-two-week-long city-wide block party, one of the most well-attended (to judge by the crowds every evening) is NIOSA, or Night In Old San Antonio, which features every kind of food booth imaginable in the little squares and streets of La Villita. One of the long-time favorites of NIOSA is a South American version of meat-onna-stick called 'antichucios', which a long-ago volunteer discovered while on an assignment in South America. 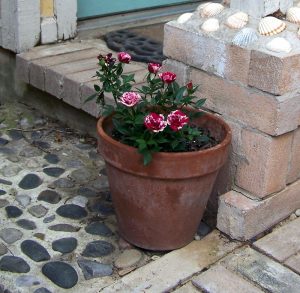 The recipe that I found calls for a marinade made by whirling 4 chopped jalapeno peppers in a blender with a little water and adding the resulting pepper slurry to 1 ½ cups red wine vinegar, 1 cup water, 1 tsp each cumin, paprika, and oregano with 2 tsp salt, ½ tsp black pepper, and a couple of crushed garlic cloves. Cut one large beef tenderloin or sirloin or top round into 1-inch cubes and marinate in the pepper/vinegar spice concoction overnight. Thread onto skewers and roast over hot coals, basting with marinade. The original version called for beef hearts – which since they are a muscle – are rather tough and need a powerful marinade. Otherwise – it's like chewing steak-flavored rubber bands. 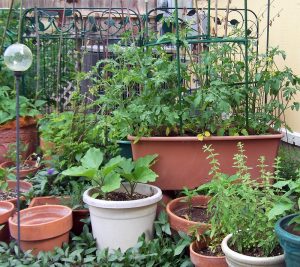 And I know this because – back in the day, when my parents were raising four children on a single salary, my mother joined a food co-op which offered serious bang for the food dollar. One of those bargains was beef hearts. Mom would bake it, thinly slivered in a casserole with rice, and my father would inevitably break out in song – from the musical Damn Yankees:

The casserole was an oblong enameled cast-iron number and very heavy; they loved each other very much, since Mom never hauled off and brained Dad with it. 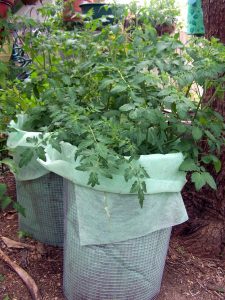 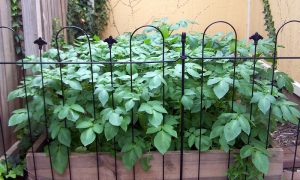 Speaking of food, and saving money on it and all – the last couple of weeks of mild weather have done wonderfully for my little patch of back yard paradise. The first embryo tomatoes were spotted this morning, and the plants are simply covered in blossoms. This might be the year that I actually have enough tomatoes to think about canning and preserving them. I followed a suggestion on another blog for making raised beds – a circular construction of chicken wire, lined with weed barrier, and filled to within ten inches of the top with leaves, which gently compost as you grow stuff in the top ten inches or so of soil. It's working pretty well so far – even better than topsy-turvey hanging planters. The raised bed full of potatoes is also thriving, and the pole beans are launching themselves up the poles with energy and enthusiasm. What a difference just over two weeks!

Oh – and if the thought of downtown Fiesta traffic gives you the willies – check out the Running of the Wiener-Dogs in Buda. This year's poster is a wee bit of a change from the usual movie-theme. This year it's a TV show: Yes, it's Dog Dynasty...