The Gruene Leaves of Summer 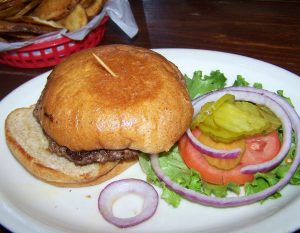 So, having worked over Mothers’ Day weekend delivering edible fruit centerpieces, my daughter and I decided that we would slack off – yes, indeedy, we would go off and do something interesting – the Saturday Farmer’s market in New Braunfels, and a pit-stop at Granzin’s Meat Market . . . that’s the meat and grocery store tucked cunningly away behind Bluebonnet Ford, on IH-35N . . . which offers the most divinely delicious sausages and frankfurters around. We found out about Granzin’s almost by accident, by the way – when I went up to the Sophienburg earlier this spring, to do some publicity for one of my book appearances. There was an estate sale my daughter wanted to check out– so it was too late for the Farmer’s Market, but I suggested, “What about a late lunch at the Gristmill in Gruene and Granzin’s on the way back?” 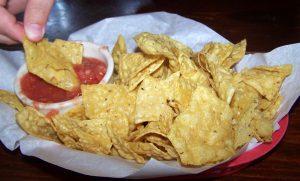 I know, Gruene on a summer weekend, but we thought – hey, late in the afternoon – late lunch, no problem. But as we came into town, my daughter observed, “It looks like a lot of other people had this very same idea, Mom.” Well, maybe – but not enough to fill up the acres of parking-lot, discretely tucked in behind the trees and gardens all along Gruene and Hunter Roads, even though there was a deputy directing traffic at the intersection. Imagine, a little bit of town so otherwise sleepy and laid-back that there isn’t a traffic light. 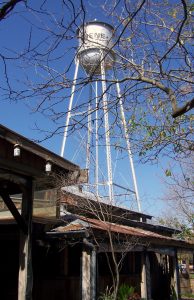 But it was lively enough on Saturday – pleasantly and reassuringly full of sightseers and music-lovers. We stopped into the Gruene Hall, the oldest still-running dance hall in Texas, where all the window-shutters along the side walls were open and dropped down for the breeze to wander in and the sound of live music to wander out. Then some serious time in the two antique malls – me thumbing through books, and my daughter sneering whenever she saw Indiana pressed glass miss-labeled as Carnival glass. (She has become quite the snob about such things, but vintage pressed glass has become her obsession.) I know that there are hard times in many places lately – floods along the lower Mississippi, fires in West Texas, general depression in the Rust Belt states . . . but not much of it was showing in Gruene. Even at mid-afternoon, we still had to wait twenty-five minutes for a table, but it was a very pleasant wait with more live music – a guy with his guitar, doing a medley of solos and songs that he had written himself, in between some patter about the musician’s life. (Which always reminds me of the joke: what do you call a musician who has broken up with his girlfriend? Broke and homeless.) 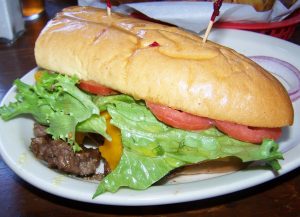 Conservative me, I just had the basic burger, but my daughter went all adventurous and had a beef tenderloin sandwich – which was fantastic, or so she said. We split an order of French fries, as the Gristmill makes them, which are sort of like thick-sliced potato chips, and some tortilla chips and salsa, which were just as good. The tortilla chips were freshly-made and scrumptious, but the salsa wasn’t quite it’s equal, being lumps of mooshed-up tomato and chilies, with tomato-water. Still – a lovely afternoon, and with the rain this week, Gruene and the Hill Country may be at the best they’re going to get this year. 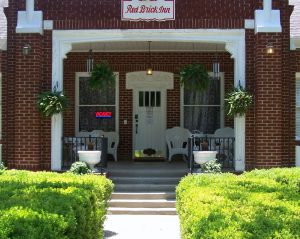 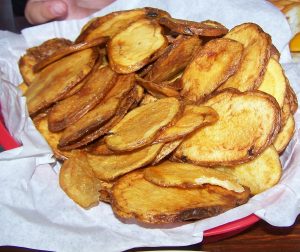