Guess the Movie Clues are Pictured 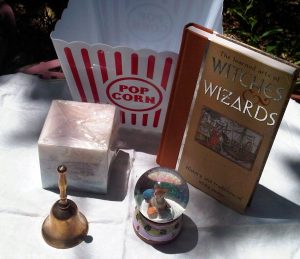 This was an amusement thought up by the Queen of the Red Hats group – which is not officially a Red Hats' group, but is really just a group of ladies of a certain age, who call themselves the Cherry Bonnets, and think of themselves as holding up the friendly, slightly exhibitionistic, somewhat anarchic social end of what the Red Hatters used to be. We put on red hats and purple shirts (in my daughter's case, since she is well under the cut-off age of 50, a pink hat and a lavender shirt) and meet once a month for dinner, a themed gift exchange and lively conversation at a chosen restaurant . . . this differentiates us from the Shiners and similarly long-term male organizations, in that we do it for the pure fun. And in my case, to get me out from behind a computer keyboard on the third Tuesday of every month. 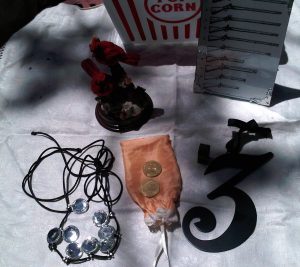 Again, like the home-brewing and cheese-making thing, this was my daughter's idea. She insisted that I needed a real-time, meat-space social life, so a couple of years ago, we happened to be out for dinner at a Cajun restaurant in the Forum at Olympia Parkway (alas, long gone – I think Panera Bread moved into the space, although the food is just as good, either way) and the Cherry Bonnets happened to be having one of their do's . . . or affairs, as they call them in the old-fashioned and purely social sense. So, we've been toddling out to a monthly dinner ever since, and having a moderately good time, and getting home in time to watch mid-to-late evening television. Party-animals until the wee hours, the ladies are not. But we still manage to have a good time. 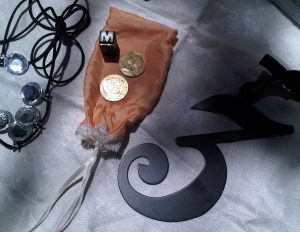 A couple of dinners ago, the Queen of our group suggested that for our most recent event, we should bring a movie-based gift basket for the obligatory exchange; popcorn and movie candy – and at least four clues to a specific movie. The fun of that would be in guessing exactly which movie was meant: anything would be within play, although something over forty years old and/or thunderingly obscure would not be any fun at all. We had about three months to think about this, and for my daughter and I to collect the various clue items from our various sources, mostly yard sales, the retail severely-marked-down-shelves and/or the Dollar Store . . .

And it was a blast, although no one guessed the Queen's chosen move. She provided a bag containing a zip-lock bag of fresh apples, a print-out of a picture by Leonardo da Vinci, a package of a set of fairy wings, and a little plastic princess tiara. And no one guessed "Ever After" – that re-rendering of Cinderella, where Drew Barrymore threw apples after the Prince, was helped by Leonardo to appear at the ball in a costume of wings, and become a princess . . .

Mine and my daughter's movie clues are pictured: Guess?