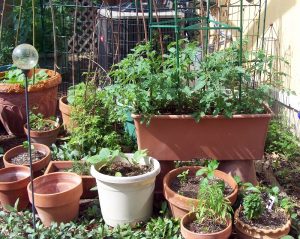 All right then – I confess that after last year’s disastrous tomato adventure – in which that which wasn’t killed by the heat was demolished by invading rats – I could be forgiven for giving up entirely. But darn it, the year before was so bountiful … well, not really all that bountiful, but a good many dinners enlivened with fresh sliced tomatoes on the salad. I hunger for fresh garden tomatoes, and it’s too darned far to drive down to Trader Joe’s for a box of their assorted baby heirloom tomatoes every day or so, with gas over $3.00 a gallon. I stocked up at Rainbow Gardens on a wide assortment of heirloom tomato starts, after the unseasonable hard freeze at the end of February, and embarked again on the adventure of a thriving backyard garden. 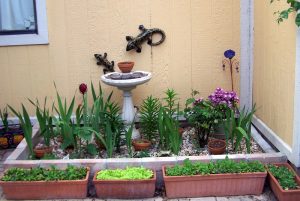 Some of the tomatoes are growing in the hanging containers, or in single surviving Topsy-Turvy, but most are in large pots, or in a pair of round raised beds – the suggestion of a commenter on a gardening discussion forum. It seems that you can take a length of hardware cloth or other wire mesh, or even chicken wire, make a circular form about the size of an oil drum with it, line with landscape fabric or weed barrier, dump leaves, grass, twigs, etc to fill it up to within ten inches of the top, then fill the rest with garden soil or potting mix. The stuff underneath composts merrily away, even as the vegetables grow … and in colder climates, the rotting compost even keeps the tomatoes going well into late fall. Lord knows, I have a sufficiency of leaves, what with the Arizona trashtree, and my next door neighbors’ oak molting frequently and generously, and little space to compost them. May as well put them to use as a basis for raised beds 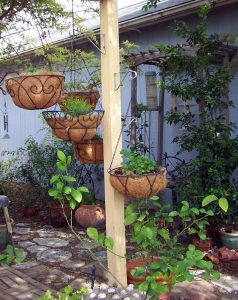 The good garden news this week is that the two sapling fruit trees I bought at Sam’s Club for a pittance sometime in January have both begun to put out tiny green leaves. I thought the peach tree would be OK, as it had noticeable buds swelling the ends of the branches, and when I cautiously pruned an end of the branch, it was supple and green underneath, but the plum was more of an enduring question. It just sat there, sullenly, week after week, all bare twiggy limbs long after the peach began putting forth tiny green leaves. This week, the plum began bringing forth leaves of its own, and I was relieved. Naturally, it will be years before we have any fruit from them, but the speed at which the two crepe myrtle trees and the fig tree grew encourages me no end. 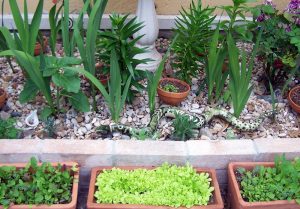 The new flowerbed by the front door – that one which my daughter and I built up when we re-did the brick step – is also doing very, very well. All of the bulbs have come up, the rose bush is thriving mightily, some of the scattered seeds have produced … well, something, and the four narrow planters where I planted mesclun salad greens have done well enough to have been harvested for salads several times already. I planted another round of mesclun greens in back, in two lengths of guttering nailed to the fence – another suggestion from an on-line garden discussion. Cap off the ends of a length of gutter, fill with garden soil, and there you have – a vertical garden. I’d really like to have this be the year that I hardly have to purchase any produce at all. 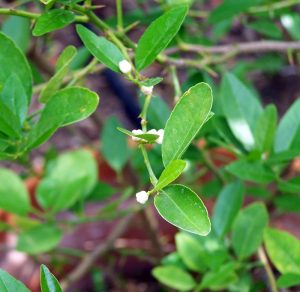 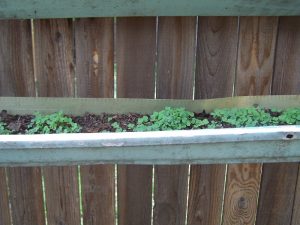 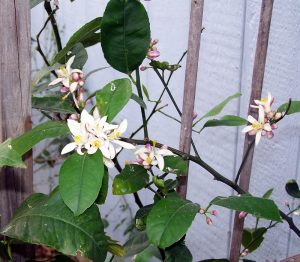 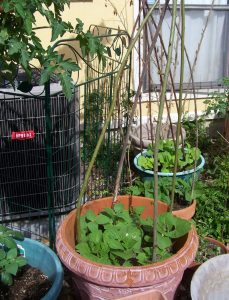