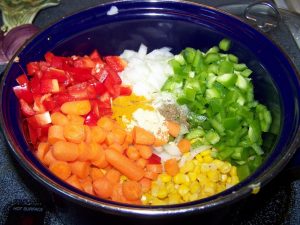 This latest adventure in home food preparation was my daughter's notion, upon noting that the aisle in our local HEB set aside for housewares and appliances had a new section for home canning supplies; including a sort of starter kit for novices; a large light-weight enamel lidded kettle, with a rack and some implements to shift around the jars ... of which there were also a nice assortment in various sizes. I was certain that we had a huge canning kettle in the garage – a gift from a military friend who was moving to another state – but we couldn't readily find it, as the garage is stuffed with items that my daughter has bought for that residence of her own which she hopes to have one day. But we might have sold the darned thing at the big clearing-out-of-useless-possessions yard sale that we had last year, anyway. 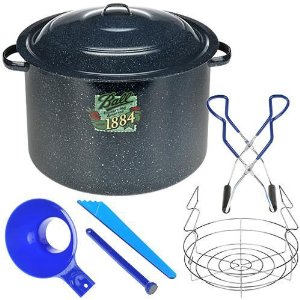 So, following her last big payday, she purchased the kit, a Ball recipe book and some flats of jars, and ever since, we have been experimenting with certain of the fruit and vegetable recipes. We are anticipating a bounty from our garden, in any case – already some of the cucumbers are monstrous in size, and if all the green tomatoes on the plants that we have come ripe at the same time ... send the search party to look for us buried underneath a couple of bushels of tomatoes. 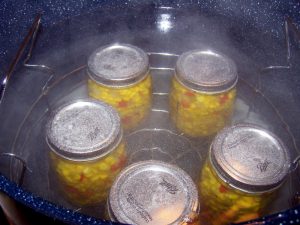 Her part-time job for Edible Arrangements is a source of certain kinds of fruit or fruit scraps ... waste not, want not, you know. Anyway I've always loved the descriptions in Laura Ingalls Wilder's Little House Books of how our pioneer ancestors went through a frenzy of canning, smoking, curing, and otherwise preserving the bounty of their scratched-out gardens, to last through winter and other hard times. I am an epicure when it comes to food, but I am also a tight-wad. I have elevated tastes, but a need to pinch the pennies until a booger comes out from Lincoln's nose. I think the historical person himself would sympathize. After all, he grew up relatively impoverished and in a milieu where people did for themselves... 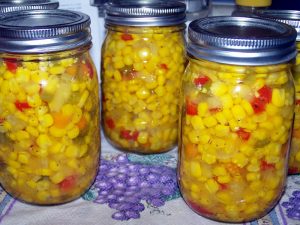 Anyway, it was a natural progression from home brewing, to home cheese-making, to home canning – although I don't think we'll go as far as getting a high-pressure canning thingy. But if high-end gourmet ready-prepared food items get any more expensive relative to the raw materials for them remaining relatively inexpensive, we might be tempted... even if I am not any more enthused about the joys of botulism than a normally intelligent human being would be...

This is a recipe for a pepper and corn relish which I copied out of a Thanksgiving issue of Gourmet Magazine, lo these many years ago. This relish which can be eaten fresh, or processed in the canning kettle for fifteen minutes. It makes about 5 pint jars.

Next weekend, we may be going to Buda for the Annual Wiener Dog Races ... and we're starting another garden project; a raised bed in a relatively unused corner of the yard. Enjoy!

Time for Golf?
Want a San Antono Golf Course Home?
Posted in Other
no comments yet
Comments on this entry are disabled
Like or Share
Loading likes...