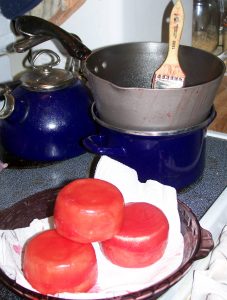 That is something which sounds vaguely like something which only ought to be done by consenting adults, in private and behind closed doors, but . . . well, it's really rather prosaic, in the process of making cheese. It's the final thing done, before stashing the wheel of cheese in the lower shelf of the refrigerator to age for the required number of months. Well, to all but the parmesan; that variety ages, dries and hardens bare and un-waxed for a year, before getting a slathering of olive oil. It will be another ten months before we can even sample it and know if it is any good, but it already is looking dry and waxy, rather like the less expensive supermarket parmesans.

This months' cheese-making expeditions have been enlivened, as we are trying to make a half-dozen or so small wheels of farmhouse cheddar. These are about the size of a tuna can, and we intend to give them as Christmas presents to San Antonio neighbors. Two gallons of milk produces three small cheeses; and farmhouse cheddar must age for at least a month. Our neighbors are all nice people, and we like them very much, but after fifteen years of alternating butter cookies and fruitcakes, it's probably time to up our game, and I am almost sure everyone has forgotten about the ginger-molasses drop cookies which came out looking like they had come from the back end of the dog, and tasting like ginger-flavored flour. No, I do not often make mistakes in the kitchen, but when I do . . . 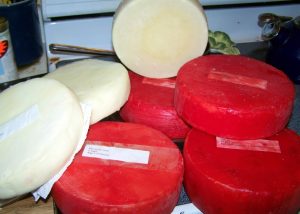 We even ventured into the purchase of some small, lidded pottery crocks for soft cheese, although the only kind of soft cheese we have accomplished this far has been by accident. My daughter has made gouda, smoked gouda, cheddar, fennel-flavored cheddar, and a couple of the other more complicated varieties . . . but just cannot get the hang of what is supposed to be the easiest: mozzarella. Aside from the very first batch, which she did from a kit – every other batch has come out disastrously. Once, it emerged from the hot whey bath as a hard waxy yellow baseball-sized bolus; every other time, it's come out as . . . well ricotta. Something goes wrong, even though the curds form and separate very satisfactorily.

She's tried the method of heating the curds on the stovetop as she folds them together: they are supposed to go all elastic, and pliable, rather like taffy. No luck. Not even the 'nuke in the microwave for ten seconds and knead them like bread dough' has the desired effect. Invariably, the curds granulate and just sit there, sullenly defiant. This has sent my daughter spare with frustration, not being able to conquer what is supposed to be the easiest cheese of all. Every time – it turns into ricotta. Sometimes rather nice ricotta, especially when fresh herbs are added – and of course, we can use, for lasagna, and to fill manicotti and pasta shells, but there is a limit.

I did suggest one day that she follow the recipe for ricotta and maybe it would spontaneously turn into mozzarella.

She so did not learn those words in Catholic school.