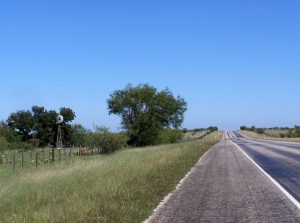 Having a book event last Saturday in Belton – a very pleasant and prosperous town overtaken and reduced to mere suburb status by the mighty municipalities of Fort Worth on one side and Dallas on the other. Not having more than a day available to spend on this excursion, and depending on the takings from sales of books at it for any extraneous adventures, we did not take any scenic and exciting backcountry routes to and from. Instead, we took the simple and uncomplicated road – IH-35, at a consistent 60 to 70 MPH, except for twenty minutes on the return journey, stuck in Austin traffic at a slow crawl. How they can manage a total stand-still on a Saturday evening is beyond me; it must be some kind of special Austin gift. 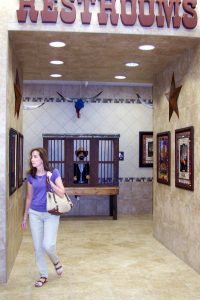 But that simple, straight-forward jaunt took us right by a number of curious attractions conveniently located right off the highway, beginning with a stop at Buc-ees in New Braunfels. At an early hour on a Saturday, the joint does not precisely jump – but as a stop for gas, sandwiches, coffee and a visit to the princely and beautifully clean bathrooms – the place has no equal in Texas or the world. Believe me; I have experienced some of the vilest public bathrooms in Europe and Japan. In Europe, they built cathedrals – in North America, the finest bathrooms since Rome. At Buc-ees, the food is pricy, but excellent, and how many other choices do you have at 5 in the morning off the interstate, anyway?

The next curiosity going north would be just south of San Marcos at the San Marcos Retail Outlets. We used to spend a lot of money there; and it seems that a lot of other shoppers have done so too, -- for they have expanded hugely. The outlet mall around Centerpoint/exit 200 is practically a tourist attraction in itself, although I don't think the Venetian gondolas get all that much use. 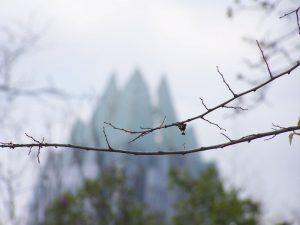 Austin – oh, what can one say about Austin: It used to be a series of scattered farms and blockhouses, among the hills and woods by the upper Colorado River, until Mirabeau Lamar killed a buffalo near Congress and 8th street, and decided that henceforward, Austin would be the capital city of an independent Texas. And so it did – these days Austin is distinguished by a vibrant music and intellectual scene, astonishingly clogged traffic on the IH-35 even on weekends, a view of the capital building from the highway, and an incredibly large assortment of hotels along the stretch of IH-35 between Austin and Georgetown. Every hotel chain in America must have three or four outlets along that single stretch.

So does another commercial establishment; a single Ikea store. There it is, on the outskirts of Round Rock, a monument to spare modern Scandinavian design and flat-pack furniture, marooned in the middle of a country where elevated taste often runs to chairs contrived out of cattle horns and upholstered in cowhide with the fur on.

On northwards – to Waco, home to Dr Pepper, Baylor University and ... most impressively to a lover of Texas history; the home of the Texas Ranger Hall of Fame and Museum, which is right off the I-35. It is so close that I would have squeezed in a brief and flying visit ... if we had not been going past at 6:45 in the mornings, a tight schedule and a serious need to be in Belton by 9:30 at the very latest.

(But there were so many interesting places glimpsed as we flew past, so many bill-boards for places ... another time, when time is not so pressing upon us. The rest of this journey is continued next week...)