Picture Framing on the Cheap! 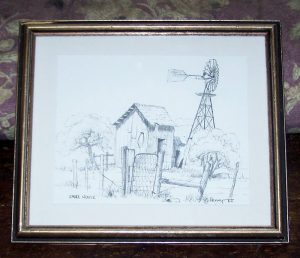 In last week's post I mentioned the gifts that I was intending to give to three people who – because I am in business with, sporadically employed by, or just really, really fond of them – rate something a little more permanent than a jar of pickled pineapple spears and some fig jam. Of course fruitcake is permanent – but it's not something you can hang on a wall. Among the items that my daughter and I bid on when we went to an estate auction in Fredericksburg this summer was an envelope of prints. They were by two local artists, of Texas subjects, were printed on high-quality paper and rather pleasing to look at, if not particularly valuable. I had the notion to frame three of them properly and present them as gifts – but as as relatively un-famous published author – I had to do this on a budget. But inexpensive does not mean cheap-looking, given some basic materials and a little know-how. 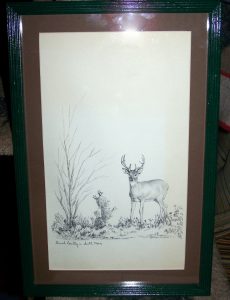 Two of the prints were a fairly standard size – 9x12, and 10x14. The third was a little larger – 14x20 – but even so, finding good-quality frames to fit them was a breeze at Thrifttown, which had a whole rack of picture frames in various sizes for $2-$7 apiece. Of course, all three came with rather awful art already in them, but that is what the trash can is for. One had a nice mat, which I saved. I also saved the hardware to hang it from. Then I peeled off the paper backing and disassembled them all; the frames needed some minor touch-ups, and the glass in each was filthy. Two frames had the contents held in with glaziers' points, the third with staples, but all were easily pulled out with a screwdriver and a pair of pliers. I used the glass from each frame as a guide to cut three new backs from ¼ inch foam-core board. 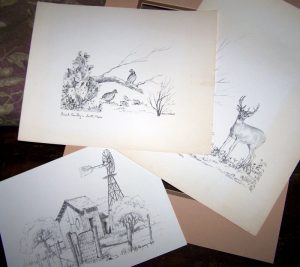 The three sheets of glass went into the dishwasher and came out perfectly clean and spotless. The frames were a different matter. From out of the shelf of painting supplies in the garage, I retrieved a can of periwinkle blue spray-paint, one of hunter green, and one with a little gold left in it. The smallest of the frames only needed a little touch-up – gold sprayed onto a paper towel, and then dabbed on the places where it had worn off. I carefully sprayed the other two frames and let them dry ... and when they were, I went off to Hobby Lobby with the largest and smallest frames and the large print to see about mats. There's a good selection of pre-cut mats available, but the print of the deer in the brush needed to have one specially cut because of the non-standard dimensions. Cost - $10 for the two mats. 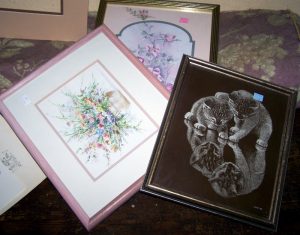 That accomplished, I set about reassembling them – first with the clean glass put back into the frame. Then I used a Uhu glue stick to lightly coat the back of the mats and center them onto the prints. Each went into the frame on top of the glass, making certain that there weren't any specks of dirt or lint or anything on the glass, or the matt and print. Pop in the foam-core and secure it with glazier's points, and then to the next to final step: another swab of the Uhu glue stick all around the back of the frame and press a sheet of brown wrapping paper cut a little larger than the frame carefully onto it. When the glue dried, I trimmed off the excess all the way around with a razor-blade and replaced the hardware ... and there's a lovely and meaningful set off gifts. Two out of the three recipients loved them extravagantly, which proves to me that it's not the expense, it's the thought that really counts.