The Allure of the Quilt 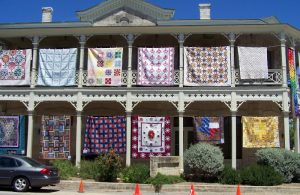 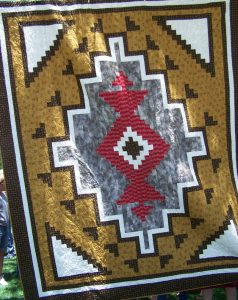 Once again this last weekend, we were lured to the pleasant bedroom-slipper community of Boerne by the charms of the Squirrel's Nest on Main Street, which supports the totally worthy services provided by Wildlife Rescue and Rehabilitation to animal-kind of this part of Texas. This visit also coincided with the celebration of a uniquely American art form – with contemporary examples hung from storefronts, and along the sides of Boerne's town plaza. They made a splendid show, all through downtown, and many of the businesses along Main Street (or Hauptstrasse) also had window displays incorporating quilts – and many of them were offering drinks ... although we had to turn down the offers of margaritas at one otherwise inviting establishment. Were they non-alcoholic? My daughter doesn't drink, and although I do, 1:30 in the afternoon is just to darned early. There was a lemonade stand in front of one place though. Perhaps we should have gone back... 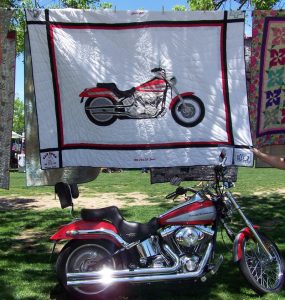 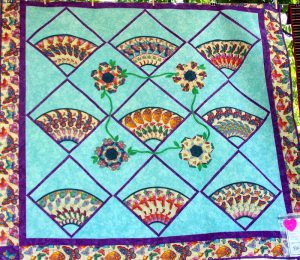 Anyway; quilts – an essentially American fabric art form, which pretty much runs the gamut from the brutally practical to the over-the-top artistic. Many examples of the latter were on display this weekend; lovingly designed and carefully calculated to draw the eye and to show off the design skills and the artistic eye of the person who made them. (Almost always a woman in the case of modern examples, and totally in the case of historical ones.) There are three different strands in quilt design, by the way, although very often they can be combined within a single quilt. There are quilts that are patched or pieced, in that scraps of fabric are sewn together to form plain or intricate geometric patterns. Then there is the use of an applique, where the design is cut out and appliqued to the fabric of the quilt top itself – and finally, there is white-work quilting, which is used on a length of plain fabric and depends on an elaborate pattern of stitching for the effect. 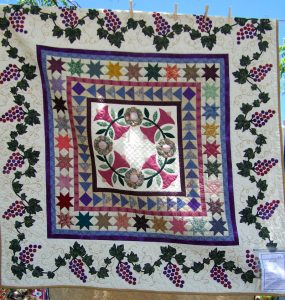 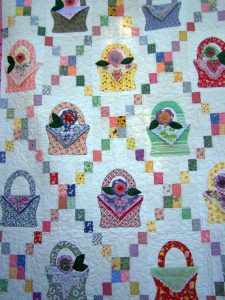 Historically a theme for the quilt was chose, pattern and color was selected from material either purchased or thriftily using scraps left over from making clothing. Then the quilt top pieces were cut, seamed together, and combined through various means with a padding and a backing to provide a reasonably warm and practicable bed-covering. All clear about the concept here? Things to cover a bed with, to keep people warm with on nights which might be cold, things which were often made on the cheap, utilizing scraps of woven fabrics, flour and seed sacks, and sewn together by women who didn't have much free time... and such bedcovers were practical things which might on occasion be thrown up upon, or have other stains from bodily functions deposited on them ... (urp). 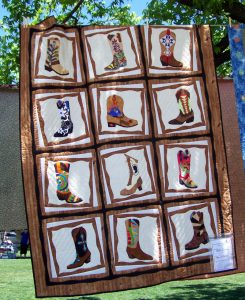 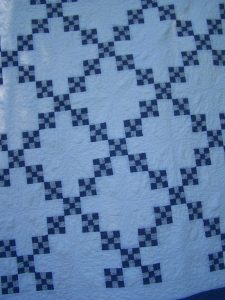 Among some historic quilts shown off in the town plaza were a number made between 1920 to 1950 or so by the grandmother of the collector who had rescued them from storage in the old family farmhouse in Kentucky. Most were patchwork, in the simpler patterns and random fabric scraps, but one was particularly eye-catching, pieced together from pink and greenish-aqua cotton fabric in an interlocking pattern of rings. That had obviously been made from deliberately purchased fabric; and very likely intended to be a show-piece, for the best guest bedroom, perhaps. Two of the quilts were interesting in that they had been pieced together from rectangular patches of light-weight woolen men's suiting. It seems that they had come from fabric sample books, and when the company catalog was updated, the seamstress had thriftily pieced together the outdated fabric samples. It made a very heavy quilt, in simple rectangles of muted shades of grey, brown, navy, and olive; not much to look at, designwise, but I'll bet anything that quilt would have been warm to sleep under on a cold winter night.