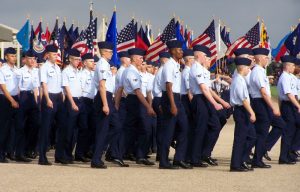 The son of our neighbor whom my daughter encouraged to enlist in the military graduated last Friday from basic training. And because my daughter is close to Sylvester's family, we both went down to Lackland for the graduation parade. There is certainly a great deal more pomp and circumstance laid on for these things now. When I finished basic, early in the spring of 1977, they did nothing much more than hand us our orders and travel vouchers, and tell us to pack our duffle bags and clear out of the training squadron dorm ... which we were quite happy to do, let me tell you. I've never since been able to endure the sight of concrete block walls and industrial linoleum with out the miserable feeling that someone was about to appear, their heel-taps clicking like castanets and begin shouting at me. I couldn't have imagined my parents and family schlepping all the way to Texas for three or four days, either ... but such was the case when I came back to Lackland for my final tour of duty. It's all very much expanded now – there is even a regular visitor's center for the families, in what I recall as the Skylark Recreation center – the recruit airman trainee's home away from home. 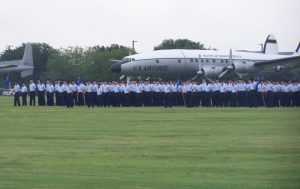 Even then, the place had changed from what I recalled – not that I could recall much, since most of the time I was outside, I was in the middle of a formation with a view restricted to the back of the neck of the woman in front of me. Most of the old WWII-era two-story temporary buildings had been torn down by 1995, and even more of them are gone now. Lackland used to be blocks and blocks of those old buildings, shaped rather like the little white-painted Monopoly hotel tokens, interspersed with a chapel, or a single-story office complex. But all gone now – replaced with new buildings, some of them very imposing. 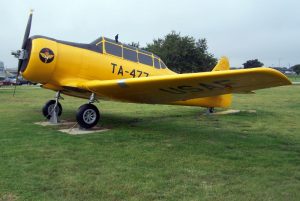 The old base HQ is gone – now there's a grand, glass-walled building on the far side of the parade ground. And the parade ground itself – which had a number of historic aircraft on static display around the perimeter when I retired in 1997, now has even more historic aircraft and all of them in much better repair. Seventy years worth of aircraft – trainers and fighters, bombers and transport, jet-propelled and piston-engine, single or multi-engine, and relics of every war since WWII. Some of them are fairly common – but one or two are rare birds indeed; like the Twin Mustang long-range fighter escort. It was designed and built at the end of WWII; two engines and two fuselages, connected by a short stretch of airfoil. 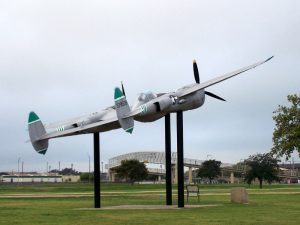 It looks like a sort of aeronautical Siamese twin, but there are only five of them still in existence, and one of them is on display at the Lackland Parade ground. It's worth a trip to the base for an enthusiast, just to walk around and look at all the classic aircraft. I don't think there is a place any closer than Wright Patterson AFB which has so many aircraft on permanent display in one small area.

The graduation parades are every Friday morning at 9:00 – come for the parade, stay for the aircraft. 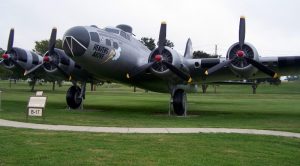 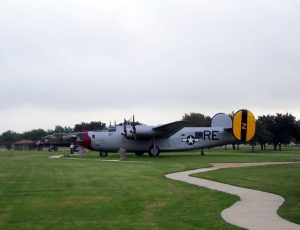 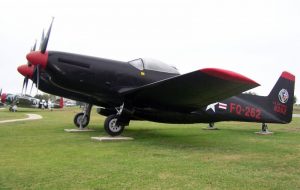 For all your San Antonio Real Estate needs, Contact Us Today!