At the Stock Show and Rodeo 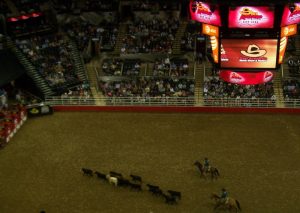 This wasn't something that we had thought about for ourselves – going to the San Antonio Stock Show and Rodeo at the AT&T Center – but a friend of ours had two tickets for Sunday, couldn't use them, and offered them to us. In spite of having grown up riding horses, and with neighbors who kept horses and the occasional cow, and chickens, et center – we had never been to a rodeo. In spite of writing extensively about cowboys, cattle drives and livestock ranching in South Texas, I had never been to the San Antonio Stock Show, either. So – it was about time. A particularly handy bit of advice came from another neighbor; don't drive down to the AT&T Center/Freeman Coliseum, he said; go to Randolph Park and Ride and take the shuttle bus. $5 per person round trip beats what we saw local entrepreneurs along New Braunfels Street advertising - $20 a vehicle. 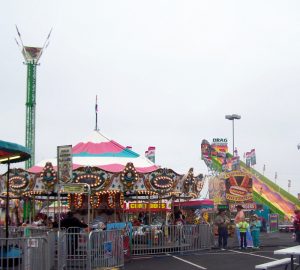 The shuttle bus dropped us off right at the main gate to the carnival area – right by the big Ferris wheel, which made it easy to locate the shuttle bus stop again when we were ready to go. The fairway was pretty extensive – one of the largest that I had ever seen, with an awesome assortment of fairground rides, and by late afternoon it was jammed with families. But that wasn't the end of it; there were extensive halls of retailers of cowboy-themed stuff, Western attire and accessories of every description, from belt-buckles all the way to those fancy trailers which haul stock in the back and have living quarters in the back. Well, I had always wanted to know what the inside of those look like, having passed or been stuck behind many on the various highways around South Texas. Talk about custom and luxurious – the bathroom was so palatial, I believe I'd almost rather live in the trailer. 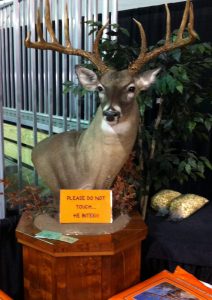 We didn't get very far into the stock exhibition barns – only as far as where a handful of horses were on display, including a black Percheron named Andy, fully 18 hands and some tall, and looking to be as large as an elephant, although exceedingly mellow about being petted. My daughter was quite taken with him. Like Crocodile Dundee said of another item, "Now, THAT'S a horse!" And as a girl next to us said in awe, "His eye is as big as my brain, practically!"

On to the AT&T center for the rodeo, where it turned out that our seats where high in the nosebleed section, about four rows from where the ceiling began. I will have to say that the view of the arena was excellent, once we climbed up there and got over the unsettling notion that if we should happen to topple over forward, we would bounce all the wa-a-a-ay down to the arena floor. 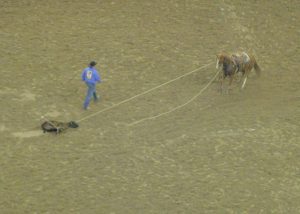 Just about all the rodeo events – that is, the ones that aren't intended for kids, like the mutton—busting and calf-wrangling – started the real world of working cattle from horseback in the 19th century. Calves and young cattle had to be lassoed and branded, and being able to do it swiftly and efficiently meant that a cowhand was good at his job. Being able to last a good few rounds on the back of a fractious horse was also a useful skill, but I am just not all that sure that staying on the back of a bucking steer was all that useful. On the other hand, life likely got pretty boring around the ranch of a winter, before social media and all.

The stock show and rodeo lasts through the 23rd, with a full schedule of competitions, exhibitions and displays. Take my advice though – take the shuttle bus. 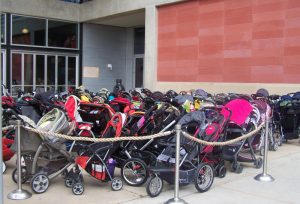 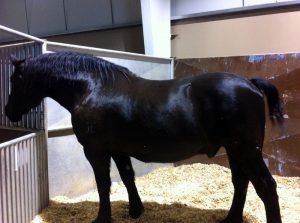 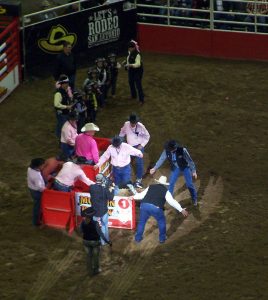 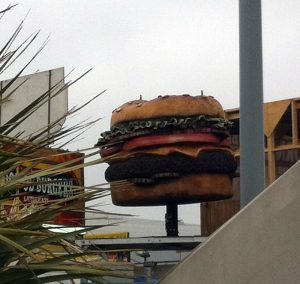