Knowing how important historic 'firsts' are to civic life and the partisans of hometown institutions, I expect that any day there will be a showdown between Lockhart and Galveston over which town has the oldest continuously operating public library in Texas. A routine googlectomy turns up the competing claims of the Rosenburg Library in Galveston (1871) and the Dr. Eugene Clarke Library in Lockhart (1899), despite the 30 years difference. Perhaps the Rosenburg Library was sidelined in the aftermath of the great hurricane which struck in 1900, and that is why the 'continuously operating' caveat is in play. 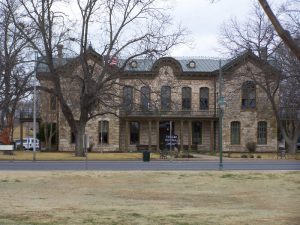 In any case, San Antonio's public library system was late to the game, with the oldest library branch only opening in 1930. (It's the San Pedro Branch, in San Pedro Park.) A round of public libraries in Texas were funded around the turn of the century by industrialist Andrew Carnegie, a bare handful of which still exist as libraries, although many of the buildings are still in use for other purposes. Generally, it appears that any lover of books and reading in Texas before the last quarter of the 19th century was pretty much on their own, although this does not rule out private libraries and friends circulating books among themselves. Having so many other civic and personal needs – such as sheer survival, defense against bandits, Indians, wild animals, poverty, drought, flood, and all – the life of the mind and of literary interests rather naturally took a lower priority until relatively late in the game. Once established, though – and especially in smaller towns – libraries took a central part in civic life. I wonder if establishing libraries, schools and churches wasn't as much of an outlet and focus for the women of a town, at least as much as the militia, volunteer fire companies and fraternal organizations were for their husbands.

Perhaps Texas were late to the game in establishing public libraries for citizens, but I'd have to say they've made up for it sine then. And local libraries in smaller towns are still a mainstay of the community – especially if they are centrally located. I did a talk for the library in Harper, and another in Junction a couple of years ago, and found it to be so. The Junction library even had a lovely little coffee bar set up in the facility, so that patrons could read and caffeinate at the same time. The library in Comfort is also on the main street, in an old two-level store building. Fredericksburg's main library is also right in the very heart of town, in a Beaux Arts building that once was the Gillespie County Courthouse. Boerne's main library is also in a historic building on the main town square – another indication of how important a repository of books for the loan of, to the public, can become.

As many books as I do have myself – the library will always have more.