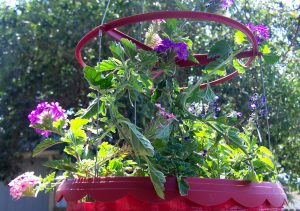 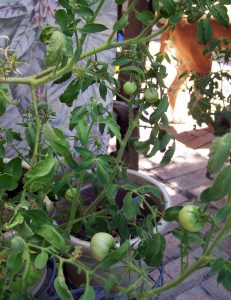 I think, by any measurement, that the enduring tomato-growing curse laid upon my poor innocent back-yard has been lifted. Never mind that we did everything wrong in planting three Topsy-turvy planters: we planted them two a planter with barely-alive generic tomato plants from off the severely-marked-down, one-day-from-being-pitched-into-the-dumpster shelf at Walmart, which we stuffed in the wrong way, forgot to add fertilizer to the plants until we had already filled the container with potting soil (which was the cheap stuff anyway) and didn't have enough of it to fill all three nearly to the top as directed. And they were leggy and top-heavy plants: we should have kept much of the stem inside the soil. About the only thing we did right was to hang them in a place where they would get plenty of sun for most of the afternoon . . . and since then, to water them without fail, each and every day. After some weeks, the poor half-dead tomato plants began to leaf out vigorously, to produce branches that went first went down, and then up, and put out ever more leaves, and finally scatterings of tiny yellow blossoms. With the San Antonio summer heat being at and over 100, I had begun to wonder as summer wore on, if any of those blooms would actually produce tomatoes. The first year that I had a garden, San Antonio neighbors told me it was too hot for the blooms to 'set' . . . so, I had basically what amounted to be an ornamental tomato plant. 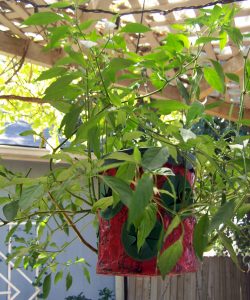 About two or three weeks ago, – my daughter spotted a tiny green tomato, about the size of a pea. And then another, and a handful more, to the number of about fifteen, in varying sizes from seed-pearl to the biggest being about the size of a Bing cherry. And there are even more blooms coming out still, so it might be that we will have an avalanche of tomatoes after all, although my fingers are crossed for the safety and continuing ripening of those tiny embryo tomatoes. I would so like that. Fresh tomatoes in salads, mixed with cooked pasta and toasted pine nuts, sliced and dried in the dehydrator, frozen whole – so that one can skin them easily with a vegetable peeler. I can deal happily with a flood of tomatoes, as they have an infinite number of uses. It's not like zucchini – which, let's face it – has a comparatively a small number of ways to dish it up: Zucchini pickles, steamed fresh, grated to make a frittata and in zucchini bread. And speak as one who basically likes zucchini, too.

The Topsy-turvy of peppers is doing well, after having been severely pruned by something with very sharp teeth and an appetite for green pepper plant leaves. I moved it to hang from a beam at the very center of the back porch roof, which seems to have made it too much trouble to get at for the predator. 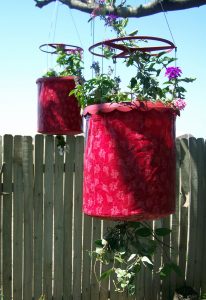 And finally, my daughter found another two Topsy-turvy containers on the marked-down shelf at our local HEB – containers to plant humming-bird attractive plants. So now our back yard is transformed into the fabled Hanging Gardens of Spring Creek Forest, since they two are full of salvias, jasmine and other humming-bird and butterfly delights. And we have already spotted a hummingbird visiting, almost as soon as they were planted, and this morning a Monarch butterfly, doodling around from flower to flower.