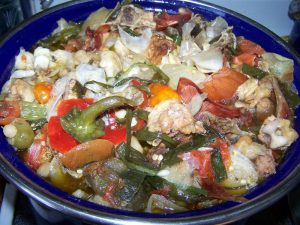 This was one of these things that I read so long ago that I don't remember when, or who, save that it was an interview with a rather clever and creative chef being interviewed, and just about that time I had despaired of finding any broth – canned or as a bouillon cube – at the commissary or local supermarket which wasn't expensive, unbearably salty, or both. Now HEB, Sprouts, and Trader Joe's all offer a nice variety of flavored and low sodium broths and I have used them for some splendid soups, especially when nothing sits very well on on a fractious stomach except chicken broth with a smidgeon of rice or fideos in it ... but nothing beats home-made broth made the way that I did, following the advice of the very clever and penny-pinching chef.

What he advised was to keep a special container in the freezer, and whenever you had vegetable scraps, cut ends or clean peelings, or even whole veggies past their best-by date, to throw them into the container. Onion ends, mushroom stems, ends of celery – in fact, everything but broccoli, cabbage and cauliflower scraps could be used. Omit anything spoiled, rotten or moldy, of course. If you are not a vegan, then bones and trimmings from various meats – chicken necks and ham-bones and the like – can be added as well. When the container is completely full, empty the frozen scraps into a large stockpot, and add a handful of fresh parsley (or any other fresh herbs you have available – thyme would be fantastic), and some whole peppercorns, and fill with bottled or tap-water up almost to the top of the pot. Cover the stockpot, set it on the stove over low heat, and just let it simmer for a good few days, until all the vegetables are cooked to softness and the broth itself is a rich deep brown.

And that's it: after a couple of days, take it off the heat, let cool, and pour the broth off. I like to run it through a fine mesh strainer, and package it in 2-cup to quart quantities for the freezer out in the garage. Nothing makes a better base for soup – and one of my very favorites to use broth for is a lentil and brown rice soup, from Nava Atlas's Vegetariana.

Cover and simmer for half an hour or so, until lentils and rice are done. You can take the onus of being vegetarian off it by adding about half a pound of kielbasa or other smoked sausage sliced into rounds, towards the end of the cooking time, and serving it with a little grated cheddar cheese on top. I made it once with imported green lentils from France, and people almost swooned.