Midsummer in the South Texas Garden 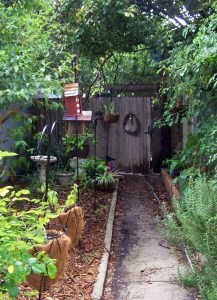 At this point, we have about filled the back yard of my San Antonio home and the narrow strip running along the side of the house with just about everything it can hold; plants in the ground and plants in pots, or hanging from baskets from the edge of the back porch. Now my daughter has begun looking speculatively at the front of the house ... which admittedly has begun to look a little neglected. Well, those parts not covered with enthusiastic plants are looking neglected. Five or six years ago, I planted one side of the driveway with mostly xeriscape plants, and things which I recall from Greece. There's a small olive tree in the middle of it, with a fig tree, and two grapevines growing on metal obelisks, a pair of rose bushes, a lot of sage and rosemary, and one tall bay tree. It's become pretty much a jumble, now, but a not unattractive jumble. It all thrives on whatever rain falls from the sky. 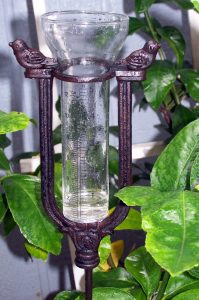 It's the other side of the driveway, and the walk up towards the front door ... that is the area which my daughter warns me is looking a bit slummy. "We don't want to be 'those people' in that house," she warns me, balefully. The Matterhorn of mulch supplied in the spring by the neighbor doing serious tree-trimming helped a little bit, but the bald fact remained – the length of walkway to the front porch borders a long skinny stretch of mulch with nothing much to break it up save a pair of wildly enthusiastic rose bushes and a small almond verbena tree. I had started a planting at the end – where the gate to the back garden opens, but the stretch in between it and the rose bushes looked ... well, bare. And my daughter was struck by an idea when we saw some garden adornments on sale at Tuesday Morning. Among those items were some tall metal shepherd hooks, to hang plants from – very sturdy items and at a very good price. 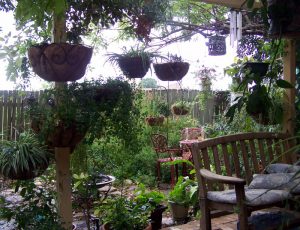 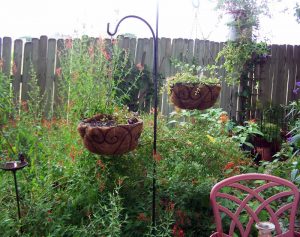 Why not line the walk with four or five of these, and hang baskets of plants, and some bird-houses which she got at a yard sale a couple of weeks ago, and swap around the two birdbaths? Move the small concrete one out to the front, for the amusement of the birds, and the tall metal birth bath from where it had been to the middle of the garden in the back yard. So, 'twas done this morning, and with a humongous bag of potting soil, all the new hanging baskets were planted. We even added a new rain-gage to the eccentric collection of garden ornaments ... one which I had been agonizing over at the Antique Rose Emporium. On Saturday they only had four left, so obviously I had to make a decision ... and by this afternoon there was even some rain in it. At last I have been rewarded in planting the flame acanthus and agastache bushes, which between them have sprawled out a long way along the back fence. This week we have seen a pair of hummingbirds busily working their way along the red, and red-orange flowers, almost every morning and afternoon. They might even eventually discover the humming bird feeder, too...

How many useful and attractive plants can one cram into a small suburban garden? I don't know yet, but we're having fun finding out.