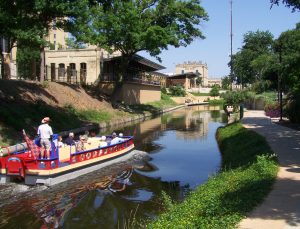 It’s not much of an exaggeration to say that the downtown Riverwalk is the heart of San Antonio – after the Alamo, it’s the other completely unique tourist attraction. Water, trees and skinny riverbank gardens in the heart of a high-rise city – not many other places like it, and all hail Robert Hugman, the architect-genius who conceived the idea of a riverbank promenade, lined with shops and adorned with bridges and gardens. 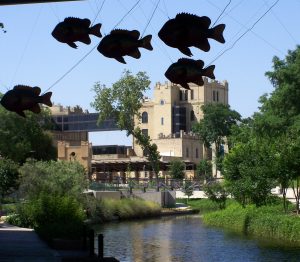 Water and plenty of it drove the establishment of a settlement and missions here in the first place: an oasis in what was otherwise near enough to a desert. Early San Antonio looked to the water, measured out careful amounts through the acequias, the irrigation ditches. By the mid-19th century, travelers and visitors noted that many of the best houses had gardens that stretched down to the riverbanks, and there were little bathhouses and pavilions, so that residents could go swimming in the hot afternoons. Mills and breweries also sprouted up along the river, having a need for fresh water, or water-power . . . and now we are turning to the river again. 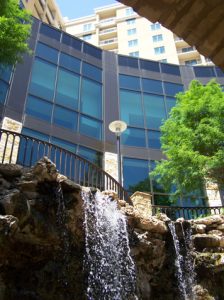 My daughter and I had business at the Pearl Brewery last week and we thought – oh, let’s bring the dog, and explore the new part of the Riverwalk, which we had seen from previous excursions to the Farmer’s Market and to La Gloria. So off we went, intending really to only go a few blocks – my daughter was only wearing light sandals, hardly the right footwear for a prolonged city trek. But once we got down to the level of the new walkway and gardens, there was just too much temptation to go a little farther, just around this bend, to see this bit of river, this view, the school of flying fish suspended underneath the IH-35 – hey, they light up those fish at night, how cool is that? 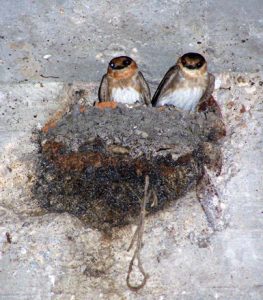 We walked past little bits of reconstructed marshland, banks covered in jasmine, the locks that lift the river-taxis up to the slightly higher river level, patchwork gardens of native plants, the tilework bench at the river-landing by the old convent school that is now a school of art and crafts, a fountain behind a classical-style arcade . . . the oldest VFW post in Texas – housed in an old white mansion which looks like it escaped from the set of Gone With the Wind, and bits of art, everywhere. There also seemed to be a lot of birds – not only the usual pigeons and ducks. Under one of the concrete bridges, swallows had built dozens of nests. There was a water-bird of some kind, standing so perfectly still, on a rock in the water-garden opposite the Museum of Art that at first we thought it was a sculpture itself. But it wasn’t – and the hawk that roosted on top of a telephone pole near the AT&T building, leisurely dining on fresh-caught pigeon (we knew it was a pigeon because the feathers were falling down all around us) – that definitely wasn’t a sculpture.

We walked all the way down to the Commerce Street bridge and back: it was marvelous, and well worth the cost. The downtown Riverwalk may belong to the tourists – but the new reach; that belongs to us locals. 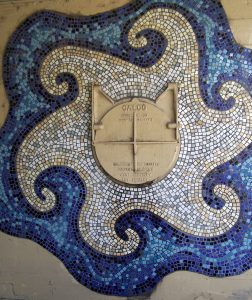 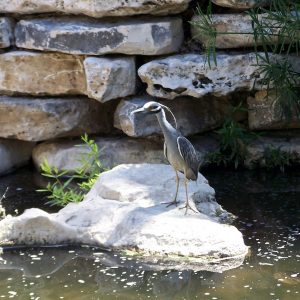 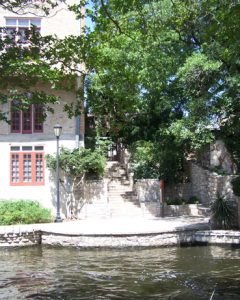 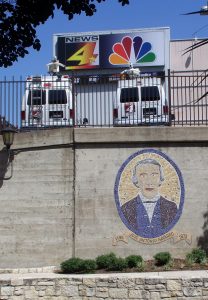