The Way of the Okra 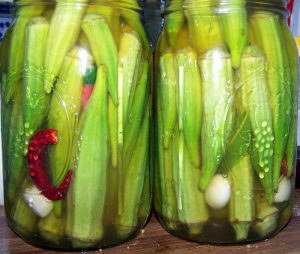 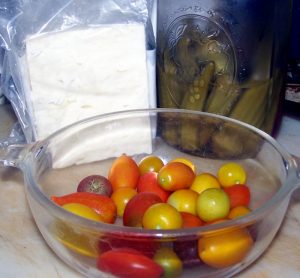 Although I have only one huge okra plant, and a couple of others which have produced intermittently and spasmodically, individual okes (is that the singular of okra, like meese should be the singular of moose?) my garden just doesn't seem to produced sufficient of them in a short period of time to make a decent batch of okra pickles on any given day. At least, not enough to be worth firing up the canning kettle. It's really not worth heating up the kitchen in my San Antonio home unless there are at least three quarts or six pints in contention ... and my okra plants just aren't that prolific. So I cheated – I went and bought two pounds of okra at the Indian market (cunningly disguised as a gas station on the corner of 410 and Starcrest) and added into it the gleanings of the last week or so and made a batch of spicy okra pickles from a recipe that I found on the interned and amended. Oddly enough, we like okra as pickles, in gumbo and even breaded and deep-fried, in which format it is as addictive as popcorn although somewhat more fattening ... but okra on it's own ... that is a vegetable that needs work.

Basically, make a pickling brine from 2 ⅔ cup cider vinegar and 1 ½ cup water, and 1 ½ teaspoons salt, and when it comes to a simmer, either add to it, or steep in a tea-ball, 2 Tbsp. pickling spices.

I used another net-recipe for pickling spice, which called for 2 Tbsp. mustard seeds, 2 Tbsp. whole allspice, 2 teasp coriander seeds, the same of cloves, 1 teaspoon of ground ginger and the same of dried red pepper flakes, a crumbled bay leaf and a two-inch length of cinnamon stick. This makes more than needed for a single batch, so save the remainder for the next batch. 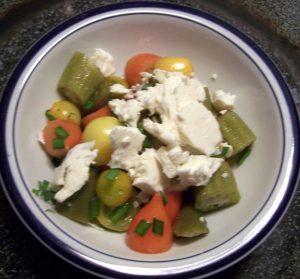 Meanwhile, pack the raw okra into 2 hot and sterilized 1-quart jars, and tuck in among the packed oke pods in each jar, 2-3 peeled and lightly crushed garlic cloves, 2-3 dried chili pods (I used ripe red jalapeno and paprika pods from my garden) and two or three small bay leaves ... I have a small bay tree in the garden, so again ... from my garden. It helps to pack the first layer of okra in the jar with the wide end down, and then wedge the next layer into it pointy end down, and distribute the garlic cloves, the pepper pods and the bay leaves as they fit. Fill the jars with okra and all until just below the point on the jar where the threaded rim begins, then pour in the hot brine and process at least 20 minutes in boiling water, as per the usual canning instructions.

This week, one of our dinners included a salad – of halved fresh garden tomatoes and sliced segments of home-pickled okra, adorned with crumbles of feta cheese and fresh parsley – again from the garden – and splashed with some olive oil. Alas, the olive is not home-grown from my own tree. That will take ... a good few more decades.