On the Road Again to Richmond Texas

On the Road Again 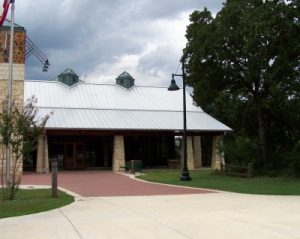 I took a break from it all last weekend, and hit the highway - in support of a spasm of marketing for the Adelsverein Trilogy

. Months ago I had been invited to participate in a cultural festival at the Fort Bend Museum in Richmond. It was the first long road-trip in a while, if three hours on IH-10 East, almost-but-not-quite to Houston counts as a road trip. I have to say that the passing scenery was not particularly spectacular, but oh, my - the rest stops are absolutely palatial. I couldn't resist taking a picture of this one, just about an hour's drive out from San Antonio. 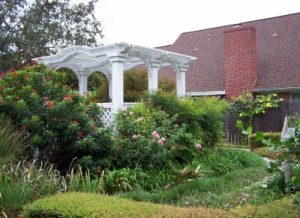 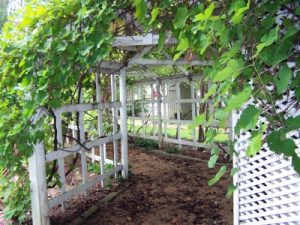 That part of East Texas is subtly different from the area around San Antonio, and the Hill Country that I know - more heavily wooded, with stands of massive, spreading oak trees interspersed with meadows of tall-grass - and much, much greener, especially after a summer where we haven't had all that much rain. Tall oaks loom over houses, and the smaller trees form tangled thickets, stitched together with wild grapevines. There are creeks with water running in them, lakes and waterways. This part of Texas was historically more Anglo; with not as deep a Hispanic presence. It was the closest to the then-United States in the 19th century, and presumably offered those American settlers in Texas a little more of what they were accustomed to, as far as landscape and plant-life went; more Southern rather than Southwest, flatter rather than gently rolling.

Richmond Texas is pretty much now a bedroom suburb of Houston. 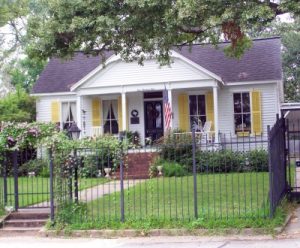 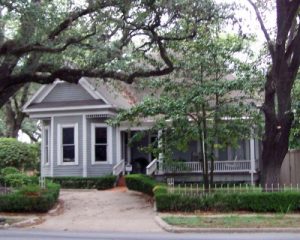 Enough remains of the town to show what it once was like, anchored by the railway and a bend of the Brazos, adorned with stately, white-pillared homes, rambling Victorian cottages trimmed with yards of wooden gingerbread trim, and dignified old two-storey commercial blocks on the main street. Here and there, this pleasing 19th century aspect is broken up with indigestible chunks of Brutal Concrete Moderne, but it's easy enough to look away from those. 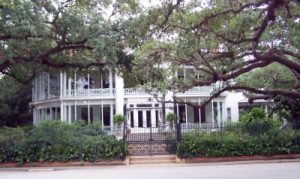 I was directed towards the very best place to eat; for soups, sandwiches and salads, nothing better than Sandy McGee's on Morton Street, situated in a 19th century storefront block which my hosts insisted was haunted. It might very well be - or it might just be someone coming back from the afterlife for a slab of cheesecake. 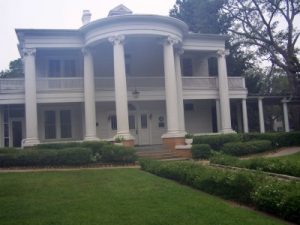 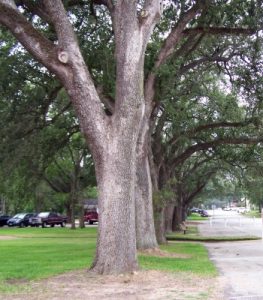 There were a lot of Texas historical connections in Richmond. Jane Long - the widow of one early pioneer/adventurer lived there for many years, as did Carrie Nation, she of the saloon-smashing temperance brigade. So did Mirabeau Lamar, sometime president of the Republic of Texas, who fought with Sam Houston like two tomcats in a sack. Sam Houston's master of scouts, Erastus "Deaf" Smith is also buried there - ostensibly on the Fort Bend Museum grounds, but possibly underneath the nearby street intersection. Benjamin Franklin Terry, of Terry's Texas Rangers Civil War fame, came from nearby and recruited locally - his saddle, out of which he was shot in fighting around Woodsonville, Kentucky, is in the museum. After the end of the Civil War, the Woodpeckers and the Jaybirds - gangs formed by partisans of Reconstruction, and of Southern sympathizers fought at least one pitched battle for control of Fort Bend County. All in all, well worth the trip - and the cheesecake at McGees, not to mention the sandwiches are well worth it.