Ongoing Garden Plans – and a Lament 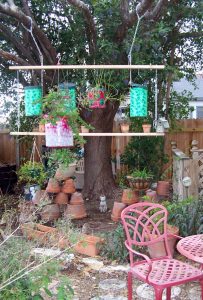 Well, we'll need a bag or two more of potting soil to properly fill up the big raised bed that I wrote about a couple of week ago, so there'll be a delay in planting it. There'll also be a delay in constructing the two narrower raised beds, which will be placed against the fence, with a bit of latticing attached, so that that plants which wish to climb – like beans, peas and cucumbers – can go to town. The big bed will be planted with zucchini and summer squash, which are supposed to produce by the ton, but which last year got attacked by some nasty kind of crud/parasite which attacked their stems and killed the plants themselves almost overnight.

The patent topsy-turvy tomato planters, which saw stout service these last two years by actually producing a nice little selection of tomatoes, were not up to another year. The heavy plasticized fabric that made up the body of the planter disintegrated to the point where I could tear it merely by poking it with a finger, and not very hard at that. The two planters which had been intended as a kind of hanging butterfly and humming bird garden fell apart even faster; one of them shredded spontaneously as we were taking it down from the tree. But the good news is – the rest of the unit, especially the metal ring and the wire loops and hooks which the whole thing hung from are still perfectly sound. And that gave me an idea to just create my own topsy tomato planters with those useful bits. I have a number of inexpensive plastic pots; just cut the drain hole a little larger, trim an ordinary cellulose sponge to fit inside the pot, insert a tomato seedling in the pot drain hole and secure it with the sponge, fill up with potting soil, and suspend the plastic pot from the hanging frame that we built last year, using the metal ring and wire loops that I saved from the old topsys! Here we go – a whole new forest of suspended tomato plants, and with luck, and the judicious application of the right kind of fertilizer and insecticides ... more tomatoes! 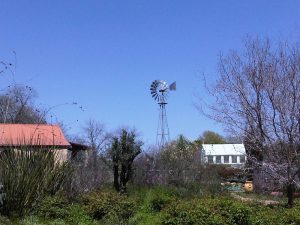 The one remaining topsy that I don't think we will use this year is the one for peppers. I've removed all the plants which survived from last year, and replanted them in large pots – just like I did with the ones from the year before. All the peppers – cayenne, Bell and jalapeno alike – are thriving. The one seedling vegetable variety that we do not need to re-stock the garden with this year is pepper. Seriously, I think there must be about fifteen individual pepper plants. 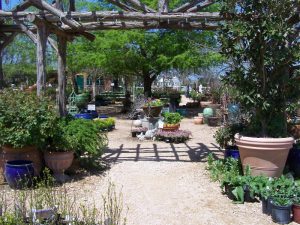 Which brings me to a lament a local casualty of the drought over the last couple of years; the Antique Rose Emporium outlet on Evans Road has closed. It actually closed six months ago, and when I first heard of this, I thought it must be a rumor. Surely we had been there – just before Christmas, sometime in September, I thought. But no – and there went a place which not only supplied me with darned near everything the least little bit exotic in my garden, but with gave me an example of what a beautiful, blooming, native Texas garden could be, stocked with roses and herbs and adapted perennials! So passes the glory of one of my favorite retail outlets, although there is some comfort to be had in knowing that their main establishment and website is still in business. I have no idea where we will go now for vegetable starts and herbs; split our devotion between HEB, Lowe's and Rainbow Gardens, I guess..