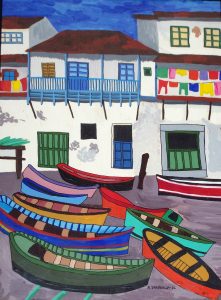 Well, it is personal, the stuff that you hang on the wall, or put on the shelf to ornament the particular place where you live . . . and anything original and artistic, and not done by you or any member of your family . . . that’s even more personal. Seriously, I’d like to be a mega-best-selling author just so that I could afford to buy some of the original art that I have seen, here and there around San Antonio. I know that most of those artists would like very much to sell something to someone who can afford it, like me – so everyone would be happy. (Even more, I’d like to have a larger house with wall space enough to properly display those objects d’ art that I would like to buy, but one thing at a time.) 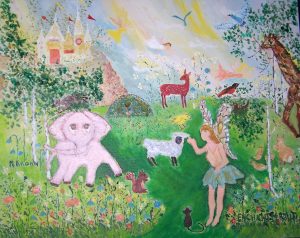 The original art that I do have in my house . . . four of them are paintings that I bought, and one was a gift to my mother, who gave it to my daughter for safe-keeping, which was just as well, because if Mom hadn’t given it to my daughter, it would have burned with just about everything else that was in their house when the big fire swept through in 2003. My daughter wound up with it, because it’s a painting of two cats. This is nice: two cats in my house who do not need to use a litter box . . . something of a welcome change. 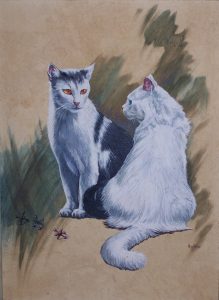 Two of the paintings were bought for my daughter’s room when she was a baby. There was an art show in a mall in California, and I saw them, and thought what wonderful, fantasies they would be, to hang on the wall of a children’s room: a children’s birthday party, in a magical garden, of flowers and children playing, the cake and the presents on the table and roses growing over a yellow house in the background. The other was of a pink elephant and other creatures in another magical garden. The painter’s name was Martha Krohn: I went to her house to buy the two paintings, since I didn’t have the money on me. The inside of her house was entirely hung with her paintings – one of these was actually in the laundry room. 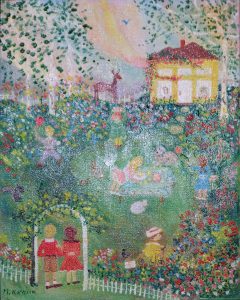 There were actually three paintings by the other artist: she was Spanish, married to a serviceman at Zaragoza AB, and I had a table next to her at the NCO Wives’ Club Christmas bazaar, one year. I was selling Cabbage Patch doll clothes, which were going like hotcakes, and she had only made one sale all the day. She was so discouraged that I bought the small one of boats on the shore, because it looked like the sea front in Greece. She had painted it from a postcard. I bought two larger ones later: one was of a street market in Spain, which I later gave to my brother as a wedding present. The one that I have left, I have to put in an out-of-the-way spot in the house, because it is of a Spanish religious procession, a confraternity – in their robes and with their drums and banner, carrying a pair of religious icons through the streets – and people who don’t know about confraternities assume it’s a particularly flamboyant chapter of the KKK.

So – it’s not a spectacular collection, not like Marian Koogler McNay’s . . . but I get by.