Playhouses and Forts In the San Antonio Botanical Gardens 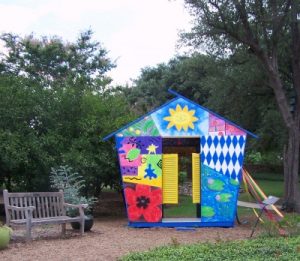 In the Botanical Garden that is - the San Antonio Botanical Garden, hidden up at the end of Funsten, at the top end of Mahnke Park . . . a series of artist-designed playhouses or forts or whatever you call something for children to hide away in for hours of self-directed play. We went to the Garden this week, motivated by curiosity about this. After all, both my daughter and I are former children, although I don't think my daughter - a military dependent at various overseas airbases - had half the experience with tree-houses, play-houses and forts that I did, growing up as a relatively free-range child in a semi-rural suburb. But anyway - a collection of fantastical forts and play-houses in a big garden must be better and more interesting for the kidlets than a pile of brightly-colored plastic, gently bleaching in the Texas sun, eh? Or so one would think . . . 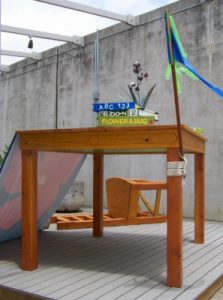 Of course, the first playhouse was more or less just that - not much different from the little wooden house with two unglazed windows that my brother and sister had as children - just large enough for a table and two chairs. The Plein Aire house, though - is brightly colored, and certainly the view out of it in any direction was much more pleasing than our old playhouse, with it's plain stained wood walls and shingled roof. But a nice, unspecific play-house, move-in ready for any child's game and fantasy. 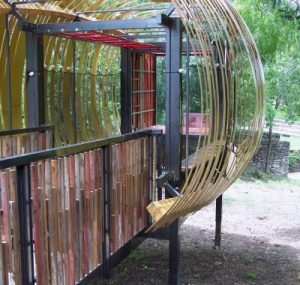 Of the next two houses - a semi-enclosed ramble of straw walls, around a tank with a bicycle-water-wheel in it, and roofed with a frame of suspended plants in old Crocs and cut-down soda bottles, and a five-sided semi-enclosed pavilion with a wall made of recycled house-hold junk . . . they didn't have quite the same charm. Children, left to themselves, will make a fort out of any old junk to hand - my brothers' best friends, whose father was a plumbing contractor, made a fort out of up-ended sewer-pipe, bricks and metal manhole covers in their backyard. But these two displayed a grim statement, as artful as they were . . . they were deliberately, earnestly, pound-home-the-point-with-a-sledgehammer educational, which is kind of the kiss of death to kids who just want to play. 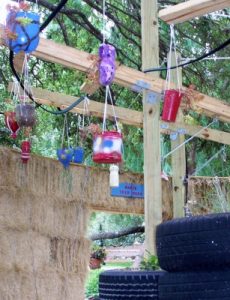 The woven passage house, of rope woven over rebar in sort of a zig-zag tunnel was refreshingly absent any of this. It could have been anything a kid wanted it to be, from a hobbit-hole to a giant bird's nest. As something in the garden, not much to do for a visiting child escorted by an adult to look at and more on; it did remind me of some of our favorite ‘fort' - the one made of two long refrigerator boxes, with an enormous pile of tall-grass hay piled up over it. 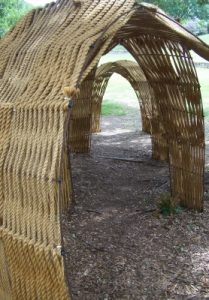 Two houses were placed down in the sub-surface courtyard connecting the various glass pavilions housing the specialty gardens. The Forte, which was made of hard-packed earth, housed a xylophone and an elaborate hanging noisemaker - all amusing enough for the children that we saw being brought through by their adults for a brief time, but would it really work as a long-term play-space? The second installation, the indoor-outdoor fort was at least clever: a gargantuan table and chair, with a tent-like covering on one side, and a stack of books, an enormous vase of flowers and a tea cup on top. Of course, we played, under a card-table with a couple of blankets laid tent-like over it to make a play-place. 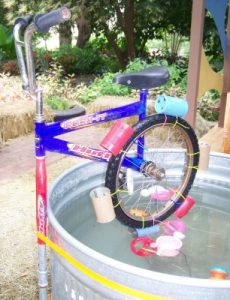 The modern Swiss Family Robinson house was again, one of those grimly educational things - again, recycled building materials featured heavily, and a water recycling system to water the plants. Not a patch on the movie Swiss Family Robinson multi-level tree-house. The last house, the chrysalis house did remind me of the tree-house that we played in as children, a platform up in the middle of a tree, all but hidden by the branches, and just vague enough as to purpose as to open it up to any.

The Playhouses and Forts exhibit at the Botanical Gardens will be there through October 24. I believe that the real test of how they would work with real children though, would be just to turn the kids loose in the garden for a good few hours, and see which ones they gravitate towards, without their parents hanging over them and waiting to hustle them onto the next exhibit. 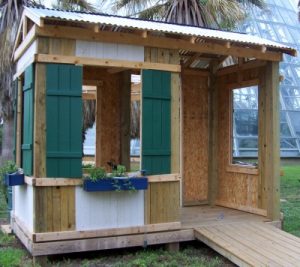 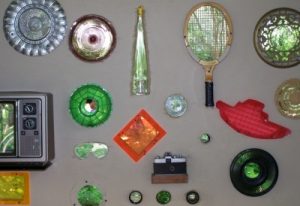 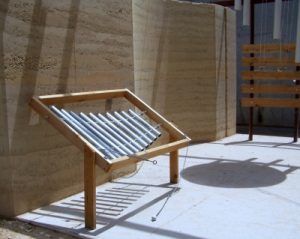