Although my Texas back yard is tiny, a veritable scrap, a pocket-handkerchief of a back yard, it somehow feels much larger, because it backs on a green-belt, and is alive with birds; not much out of the ordinary, though; the usual brown sparrows and wrens, great flashy blue-jays- the glam rock-stars of the backyard-bird world- a mocking bird now and again, the returning cardinal pair and a flock of very fat grey doves. If I wanted, I could hunt them from the back porch; it would only be easier if they walked up to the door and committed seppuku on the mat. My own indoor cats see the birds as entertainment; Cat Television, the Bird Channel. And the visiting cats did know their limits; they never tangled with Wellie the opossum. 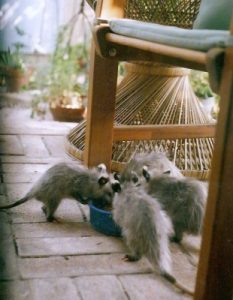 Wellie came to the back porch one summer afternoon, a couple of years ago, drank deeply from the outdoor cat's water dish, and then ate his fill of kibble, as the visiting cats watched lazily from a sun-warmed place on the rock pathway. Then, he calmly waddled across the porch, underneath the chair that I was sitting in, and curled up in the corner cupboard, among the garden sprayers, containers of plant food and the long loppers and went to sleep. I was never able to decide if he was fearless or as dumb as a box of rock, or why- other than a fearsome collection of needle-sharp teeth and claws-the outdoor cats were tolerant about Wellie. I suspect cats see opossums as merely another sort of ugly mutant cat.

Those cats and Wellie have since moved on  from my San Antoino home, but all year round, wild life in my garden burgeons: the toads come and go, and the lime-sherbet-green lizards inflating their pink throats on the wisteria branches are always there. A couple of evenings ago, I heard something crunching away at the kibble in the cats' dish, a tiny kitten-sized thing that skittered away and hid among the potted plants when I opened the door. Not the neighbors' escaped pet ferret again, but a miniature Wellie, an opossum-kit with a white face and black ears. Yesterday it was there again, joined by a second, and a third, who crept cautiously down the lattice, or from between the pots. They crunched nervously, sometimes balancing on the edge of the dish. Two of them fled when a hungry dove landed, and stalked up and down with an indignant flaring of tail-feathers and wings, but the third kit kept possession of the dish. The disgruntled dove hopped away off the porch and the two shyer kits crept out from between the pots again, and ate and ate until they were quite full. I assume they are living on the flat porch roof, under the shelter of the main roof overhang, and come and go by the lattice and the wisteria vines, and that the cat-opossum truce still holds. The man at the pet store says he had a semi-tamed one for a while, and they will eagerly eat slugs and snails, which is a good reason to tolerate them, even aside from the fact that they are rather amusing to watch.

I do wish I had a turtle in the garden, though. I have rescued two from various busy streets, but both times I was too far away from the house to take the time to bring either one of them home. I left them both in green pastures, out of the traffic. But a turtle would be cool - the next one I find in the road is coming straight home and joining my own little wild kingdom.