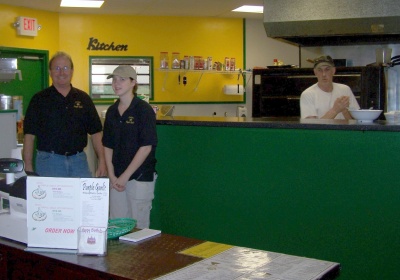 Once upon a time when I was still a corporate admin/office manager drudge, I worked for an enterprise which had a small office in Carousel Court, at the intersection of Nacogdoches and North New Braunfels. The best thing about this office - after the regular paycheck, of course - was proximity to the Purple Garlic, home of the absolutely best thin-crust pizza in all of San Antonio. Made from scratch, with carefully designed toppings, the Purple Garlic went way beyond the usual: one of their signature dishes was a white pizza, topped with a béchamel sauce and sea-food. My own favorite - as the enterprise for which I worked was one of those which did not encourage one to linger over lunch - was their artichoke heart salad, or ‘art-heart.' I had this so frequently, that eventually the staff just dished up a portion in a take-away container and rang it up on the cash register as soon as I came in the door. 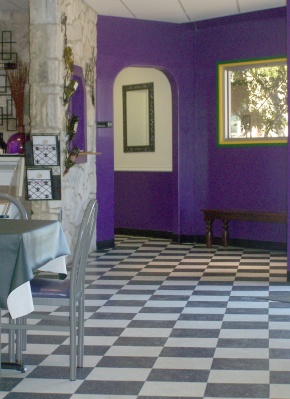 Towards the end of my time at that job, the Purple Garlic relocated to Austin Highway - and later I heard that they had closed. Alas, this often happens, but we were absolutely overjoyed a couple of weeks ago to discover that no - they had opened again, on Austin Highway at Rittiman, next to a Pizza Hut - which I think must be some ironic comment. They're back - they're still purple, and the pizza and sandwiches are as good as ever.

And if you can't pay the Purple Garlic a visit - then here is a recipe for home made pizza, which if it isn't as good as theirs, is still a thousand times better than that of the place next door.

This is adapted from a recipe for deep-dish Chicago pizza, originally published in Cuisine at Home Issue #53 (p.8)

Add the yeast mixture and knead on low speed for 10 minutes, or until smooth. Form into a ball and place in a lightly oiled bowl, turning once to cover with oil. Cover with plastic wrap and let rise until doubled, about 1 hour. Punch down, roll into a ball again, return to bowl, cover and let rise again for another hour.

This makes enough dough for two 16-inch thin-crust pizzas or 2 9-10 inch deep-crust pizzas made in an iron skillet. Roll out the dough, and pre-bake for about 10 minutes in a 450 degree oven, on the bottom shelf. 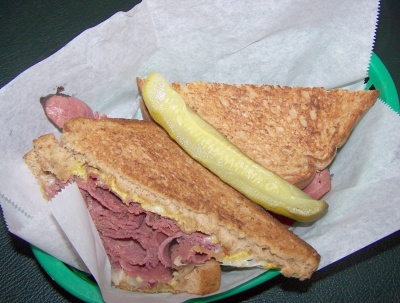 When the baked crust is lightly brown, take it out of the oven, and cover with an insulating layer of tissue-paper thin slices of mozzarella cheese, or deli ham to keep the crust from getting soggy Then, spread out about a 1/2 to 1 cup of good bottled marinara sauce over the top of each pizza- not too much, it will overflow, or make the crust soggy. Top with all the various toppings that you favor: thin-sliced onions, mushrooms, cooked crumbled sausage, pepperoni, etc - not too much, as it will have to cook through, in a hot oven in a very short time. Top with shredded mozzarella, and sprinkles of whatever extra herbs you may like. Bake again, in the 450 degree oven until cheese is just lightly melted.