Repost in honor of Dad by Julia Hayden

Beware The Contents Of The Freezer 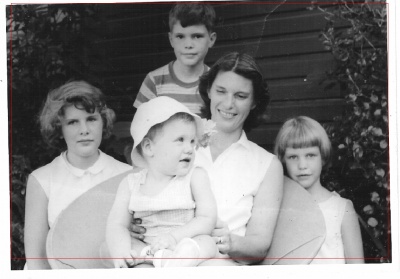 In a household with a father who is a research biologist and tends to bring work home, and a mother given to adventurous essays into whatever is cheap and plentiful at the co-op, the deep-freeze is liable to contain some very strange things. When I was a teenager living with my parents, my younger brothers, JP and Sander used to win the gross-out contest among their friends just by opening the deep-freezer and unearthing the bag of dead mice. If that didn't do the trick, the golf-ball sized tumor that the vet removed from the cat (and which my father never got around to doing the biopsy on) was the sure-fire guarantee.

Then there was the monkey skull... Dad brought it home and boiled it clean in a saucepan that we were never able to look at in the same light again, along with a pair of chicken drumsticks. He mounted the cleaned skull and crossed chicken bones on a length of wood, and hollowed out a small depression in the wood to make an ashtray for a friend that Dad thought should stop smoking. I never found out if it worked, but the smell of boiled monkey lingered for days.

The bag of mice were from a failed experiment--- again, Dad never got around to doing the autopsies. The muskrat skin came from a fresh roadkill; never got around to curing the skin. He didn't just bring home dead animals, there were live ones, such as the bowl of goldfish that were supposed to expire from the effects of the experiment, but didn't and so came home. Sander had a kangaroo rat named Sylvester and a lovely pink and grey rosy boa, named Rosie. She had to have live food, so she went in once a month to the lab with Dad for a mouse or two, until she escaped her cage on the trip back one day. People sat nervously in that car for years, especially ones who didn't care for snakes. We had a turtle in the backyard, who loved eating dandelions, and for a while, a horse who clomped around, eating kibble from the dogs' dish. On one memorable day, the horse treed the Fuller Brush man, who came in the back gate by accident. No fan of large animals, he never returned.

Mom had a small budget, a large family and an open mind. She was the only Anglo in town who made tamales from scratch, and cooked things like jugged hare, which Sander refused to believe was rabbit: he insisted that there wasn't a bit of hair in it. She and Grandma made grape jelly from the Concord grapes growing on the arbor, which we had in our school lunches every day: I still gag at the sight of a PB&J. Then when she discovered the co-op, which had excellent prices for strange things like beef hearts, and made interesting casseroles of slivered heart and rice. This made Dad invariably sing "Heart- you gotta have heart!" from Damn Yankees every time she dished it up. The incredibly cheap chicken should have been stewed, rather than covered in crumbs and baked, for they tasted like chicken-flavored rubber bands. Only Kiet, the Vietnamese refugee living with us at the time, thought they were edible at all. Through all the weird food, we could tease her by ostentatiously opening the freezer and doing an inventory of the mice, tumor, skull, and other biological specimens before tucking in to dinner. Just to be on the safe side, you see.