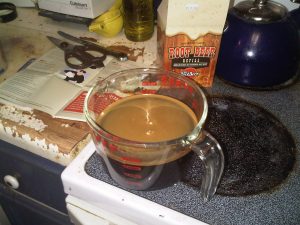 So, my daughter and I have been experimenting with a lot of do-it-yourself food, lately;  Breads and cheese, beer and wine, mostly. It's part of our family culture, or it might be in our DNA, an ancestral proclivity to have a go at something, since it really can't be all that hard. Well, some things are a bit tricky, and require a lot of instruction and experience: fine cabinet-making, for instance. And installing HVAC systems. And automobile maintenance – just not interested in that. But we have found that we have had pretty good results with many of our own D-I-Y projects, especially the food-based ones. What's so complicated about following a recipe, and making a food-product for the household just as our ancestors did?

OK, so without an electric stove, indoor running water, refrigeration and food-grade PVC containers, but the results are extremely satisfactory  . . .  in fact, some of them are more than satisfactory. The home-made honey mead was ambrosia in a wine-glass, and the stuff that aged a little actually came out of the bottle with a slight fizz to it. The first wheel of farmhouse cheddar cheese came out very well, too – although it came out slightly crumbly, with a texture rather like feta. And when you've made it yourself from scratch, you certainly do know exactly what went into it.  In the case of the wheel of Parmesan I made last week – four gallons of whole milk, and not much else. It has to age for almost a year, so I won't know until then how close we've come to the real thing. 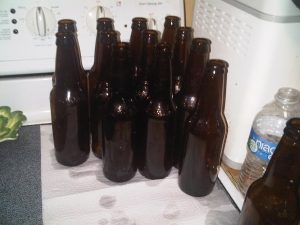 One of the other big reasons for doing this is that we actually do appreciate the good stuff, when it comes to food and drink; champagne tastes on a beer budget. The solution is to either drink mineral water on six nights and champagne the seventh, learn to like beer, or learn to make champagne. Or cheese, or multi-grain breads; many of the necessary ingredients for making something at home are now widely available either in the grocery store, a specialty store, or on line: wheat gluten, rye flour, liquid rennet. I really can't say if we come out ahead, comparing the cost of ingredients for our home-made stuff,  against the retail price of the cheapest available commercially mass-produced foodstuffs at HEB or Walmart, but we certainly come out ahead in comparison to the cost of the top-line gourmet products from Central Market or Whole Foods.

So, this last weekend, we expanded our repertoire just a little – to root beer. My daughter had a yen for some, but the case lot at Sam's Club just cost to darned much, and I suddenly remembered seeing the ingredient kits for root beer at Home Brew Party – and I needed a packet of champagne yeast for the pear wine we just started . . .  (anything under $1.00 a pound, we'll have a go at making wine out of it). So, today – a vat of root-beer, about twenty bottles, done up in a two-gallon lot, bottled and capped, and waiting for the fizz to develop. Which it should, in a day or so.

And I just had a thought  . . .  what would a root-beer float taste like, made from home-made ice-cream and root-beer. I'll bet it would be fantastic.

The San Antonio Home Brew Party Shop is located in the strip-mall at the corner of Judson and Nacogdoches, 210-650-9070. The Home Brew Party log is "A Place to meet with your friends and discuss beer, wine, mead, cider, cheese, and bread." They even have a discussion forum online to talk about brewing. These sound like mighty serious folks about perfecting their brews.
Free Online Home Search by School District
Posted in Other
no comments yet
Comments on this entry are disabled
Like or Share
Loading likes...