In the Shade of the Big Enchilada 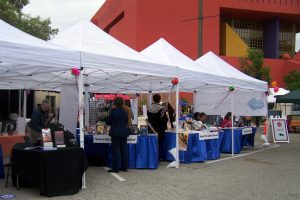 Well, that is the fond nickname given to the Central Library building in downtown San Antonio – a hulking cube with geometric cut-outs, painted in a shade of dark orange which always reminded me of paprika. This last weekend, the Central Library and the campus of the Southwest School for Art and Craft across the street from it was the site for the second annual San Antonio Book Festival. This is the kind of book bash which is a small brother of the Texas Book Festival, which is huge, as far as local writers are concerned. Alas, the Texas Book Festival is so huge, that I couldn't even begin to afford an exhibitor table there, either as a writer for my own books, or as the owner of Watercress Press and for the benefit of the authors that we do publish. But I could afford a single table at the San Antonio Book Festival, so off we went, very early Saturday morning, with two tubs of books, a tub of table accoutrements, some nicely-printed flyers enlarging on what Watercress Press could do for you, and a tall standing vase filled with origami flowers and leaves which had the company name and website printed on the origami leaves. 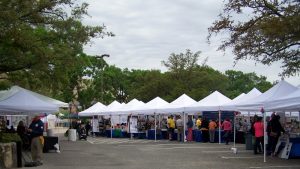 The rows of exhibitor tables were already set up in the parking lot of the Southwest School – three or four rows of neat white pop-up canopies, and white-topped tables with blue skirts, each neatly numbered and the exhibitor's name in larger letters. We were supposed to have help from volunteers in orange tee-shirts standing by, ready to assist, but the ones which we saw on the way in seemed mostly uncertain of what they should be doing for us; in any case, what materiel we had could be easily moved on the folding dolly. I wound up dragging it all myself, and locating our table; easily enough, since I had been sent a map of the exhibitor layout.
It was overcast the entire day, and early on there was an occasional gust of breeze which sent flyers and business cards and other papers all over the place. If the sun had come out, it might have been quite pleasant – but in any case, it was better than our last outdoor venue – Christmas on the Square at Goliad, this last December, which event was utterly wrecked by bitter cold. Perhaps there would have been more foot traffic through the exhibitor area, but I can't complain. 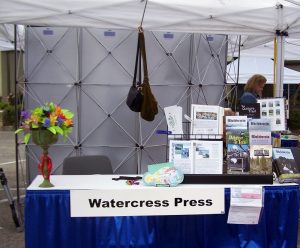 Of the three Watercress authors who took a stint at the table, the first was pleased because he sold two books, the second because we made contact with a woman collecting author information with an eye to setting up events on base at Randolph AFB, and the third because I sent her over to speak to the people in the Texas Association of Authors booth. That is a relatively new Austin-based group for independently-published Texas authors. I have met some of the members before, and better yet, thumbed through their books. Better yet, I had even bought one of them, a reference book on early Austin history. They are set up to do events with an organization table, with all of their members' books – including the aforementioned Texas Book Festival, which happens every year in late October, on the grounds of the state capitol building in Austin. That basis alone would be an excellent reason for joining them.

Home again, at the end of a long day, exhausted and ready for a glass or two of wine, a frozen pizza baking in the oven and an episode or two of the old TV series Upstairs, Downstairs. And that was my weekend – yours?