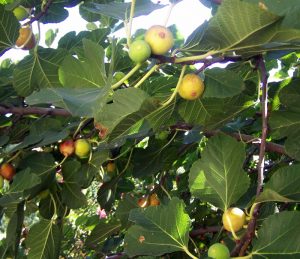 For the last month we have been having a harvest season. Not of our own garden bounty, although the tomato plants produce generously enough that we can have fresh tomatoes in a salad every other night or so; rather, we have been harvesting figs. They are ripe just now in our San Antonio neighborhood, where two of our neighbors have bearing fig trees and have given us permission to pick. 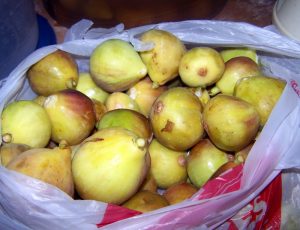 The trouble with bearing fruit trees is that very soon, the owners of it get sick and tired of the output, so cheerfully welcome anyone who will come and take some of it away. I know this: I have been there, in Utah, where my rented house had fifteen bearing apricot trees in the back yard. Eventually couldn't even stand the smell of them. It was the same growing up in California, where everyone had orange and lemon trees in their back yard. (Buy oranges and lemons at the supermarket? What strange planet did you come from, anyway? ) But back to the fig trees; every couple of days we have visited, and come away with five or six pounds each time. No wonder they are so expensive – fresh figs are incredibly delicate, bruising easily and going bad in the space of three days. But fresh from the tree, and with different means of preserving at our command, this is not just opportunity knocking; this is opportunity coming through the front door, taking off it's shoes and making itself at home. 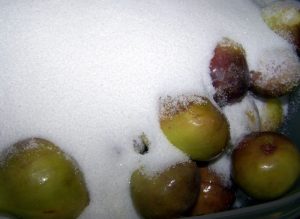 We are turning the resulting bounty into a variety of figgy treats: dried figs, of course, fig jam, fresh fig wine, and whole preserved figs. I am experimenting with two basic recipes for them. The first is from The Gift of Southern Cooking, and basically calls for at least two pounds of fresh figs (anything other than the black Black Mission variety) to be sprinkled with a couple of pounds of baking soda and soaked in boiling water for five minutes. This is supposed to toughen the skins a little. Drain and rinse the figs in fresh water, then put them into a container which can be sealed, and sprinkle with as many cups of sugar as there are pounds of figs. Let them steep in the sugar for at least twelve hours, until the juice from the figs has begun to liquefy the sugar. Put the figs and sugar into a non-reactive pan and simmer for ten minutes. Back into the container, steeping for another two days; back into pan to simmer another ten minutes. Repeat this twice more, and at the end of the third cycle, remove the figs with a slotted spoon and pack into three sterilized pint canning jars. Strain the syrup, and simmer until it reaches °220 degrees, pour over the figs, and process in boiling water for fifteen minutes. The canned figs are thus to be aged a month before being eaten. 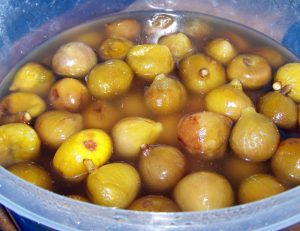 The other recipe is from John Besh's My New Orleans: The Cookbook. It's even simpler yet: a pound of sugar per pound of figs, the whole to sit at room temperature until the juice from the figs soaks the sugar, then simmer together until the syrup coats the back of the spoon, and process as per usual. This was his grandfather's favorite recipe, and his grandfather took making his fig preserves very, very seriously; kind of charming to consider. It will be another month, though, until we can taste-test the results of these recipes and see which of the two is the best.

Figs were probably brought to Texas from the Mediterranean by the Spaniards. Figs grow extremely well anywhere in Texas, with a long growing season and proper care. San Antonio is even fortunate enough to have a home grown variety of figs at Fanick's Nursery. Grandpa Fanick patented a fig tree some 50-60 years ago and named the fig, Texas Blue Giant. The Blue Giant produces extra large figs with purple skin and amber pulp. It is so good fresh or dried. You can buy grandpa's fig tree or many other varieties of figs from Fanick's Nursery to include, Brown Turkey, Texas Everbearing, Black Mission, Texas A&M Alma, Celeste, Kadota and others. Fanick's is another San Antonio hidden away secret, but to those of us that frequent, appreciate their friendly nursery knowledge and helpfulness. Fanick's Garden Center is located at 1025 Holmgreen Rd on tht east side of San Antonio.