… in the spring to begin reviving the garden. 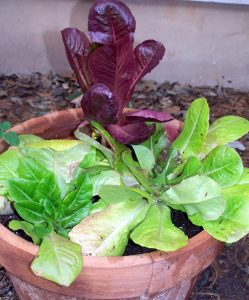 But if I knew then what I know now about the topsoil in the yard around my San Antonio home, when I first moved in, I would have hired someone to come in with a small bull-dozer and scrape off the top few inches of topsoil. Then I would have had a third of it put back into place, and mixed with another generous third of sand and a final generous third of well-rotted compost. 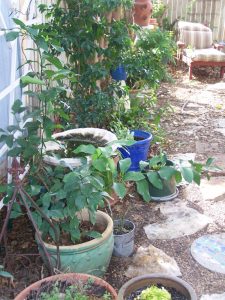 This is what I have finished up with in most of those places where I have plants growing, by the way – doing it at the very start would have saved a lot of time and trouble. The prevailing topsoil around my neighborhood is clay – splendid for making adobe bricks from. It’s dense, heavy and soggy when wet, and as dense as a conblock brick when dried out. With a pick and a shovel you can plant things in it – but getting them to thrive and grow is another thing entirely. 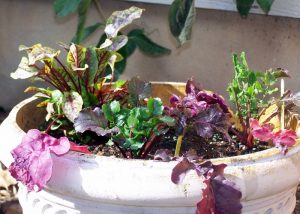 In any event, one either has to amend the soil considerably – or just say the heck with it and plant things in pots. Growing things in pots has the advantage of being able to move them around, to arrange for best effect – rather like trying out various bits of furniture inside the house. 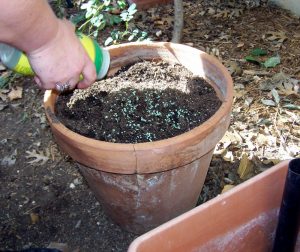 Anyway, last summer’s project to revive the garden is continuing – it’s not at all too early to begin planting a vegetable garden. We went out to the San Antonio home of Antique Rose Emporium on Evans Road and invested $20 or so in leafy vegetable starts: lettuce and mizuna, red sorrel, bok choy and spinach, and so on. I had excellent results a few years ago, growing salad greens from seed (in pots, of course!). It was really nice to be able to go out with a pair of kitchen scissors and harvest a few leaves of mache or baby romaine for a fresh salad. 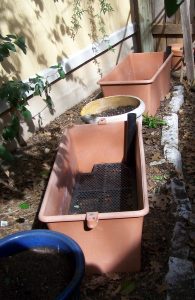 This is just a start; we have three huge grow-boxes on hand, and will use them for more vegetables, later in the spring. I finally took a close look at them, for the first time that my daughter brought them home. Now we know why they were in the trash – someone had drilled drain holes along the bottom, which I suspect pretty much destroyed their usefulness. Ah well, this is what duct-tape and plastic cement were invented for.

So much for using them to for the salad greens; I just hauled out an assortment of good-sized pots from the vast collection, filled with potting soil plus a peppering of fertilizer … and there we are, all lined up along the south-facing wall of our San Antonio home. This is prime gardening territory, as far as my yard goes: it gets sunlight most of the day – when the sun is shining, of course – and is sheltered from winds. So far this year, we haven’t lost anything to cold winter weather. I actually believe that my yard remains about ten degrees warmer than the forecast winter low temperatures. 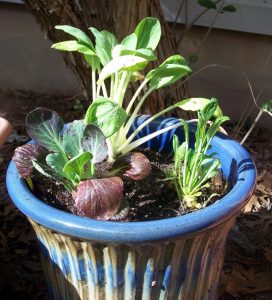 Eventually, this area will be wall to wall vegetables, just as the frame for the topsy-turvys will be. That’s how I’ll be spending the next couple of weekends – what about you?