San Antonio The City of Waters 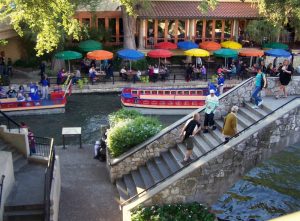 It only makes sense that San Antonio would be most famous for – after the Alamo – for the Riverwalk. The downtown landscaped banks of the San Antonio River are a tourist draw without peer. Less well-frequented, or newer developments – say, through King William and Southtown, or along the new Pearl Brewery-Museum Reach are a secret and treasured green-space as well as a breath of fresh air for residents. 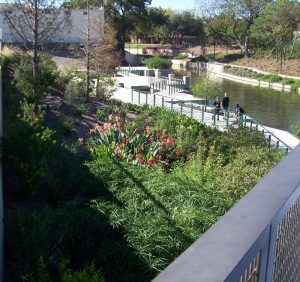 The existence of the San Antonio River is more than just a happy coincidence and landscaping opportunity; when San Antonio began to expand and industrialize in the late 19th century, the river provided power for establishments like C.H. Guenther's Pioneer flour mill – as well as power and a necessary ingredient for breweries like the Pearl and Lone Star. It was also noted by travelers and early residents like Mary Maverick that the very nicest houses in town had gardens which backed on the river – where residents could cool off in the afternoon with a dip in the cool water. The very fact that there was a constant and plentiful source of water existing in this otherwise rather dry region was the reason that San Antonio was founded here to begin with. 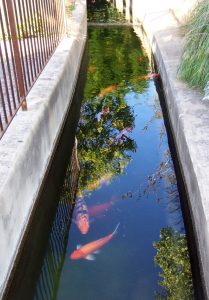 When Spanish exploring parties first reached the area in the late 17th and early 18th centuries, they found Indians camping around the San Pedro Springs, in the present-day Olmos Basin and on the grounds of Incarnate Word, near Broadway and Hildebrand. There was where many of the springs which fed into the San Antonio River originated. Taking full advantage of every drop of water emanating from the springs, the Spanish established a string of missions along the River. Being accustomed to the construction and maintenance of elaborate irrigation systems – in use for centuries in Spain since the time of the Romans – the missionary fathers constructed an elaborate series of ditches and aqueducts to conduct water to the fields where it was needed. The irrigation system – or acequia for the Espada Mission is still largely intact. Other missions – including the Alamo itself – had their own water systems to water their own farmlands. There is still a narrow water canal in the gardens behind the Alamo chapel today. 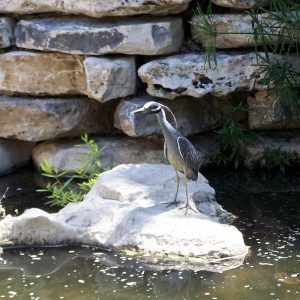 The historic springs were the outfall of the Edwards Aquifer; a kind of enormous geologic sponge – which the limestone plateau of the Hill Country soaked up. The hills gathered it up – and places like the San Pedro Springs, the Comal Springs in New Braunfels, and Jacobs' Well near Wimberley are some the places where it leaked out. (The San Antonio Water System (SAWS) gets the vast majority of the water for all of its San Antonio water customers from wells in the Edwards Aquifer.) 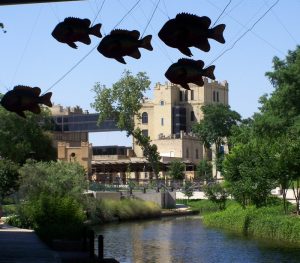 One of the most spectacular springs which fed into the San Antonio River was later called the Blue Hole. It actually gushed out of the ground with great force. 19th century visitors to the area described the scenic wonders of the various springs in prose which verged on the purple, describing the clearness of the water, the beauty of the waterfalls and pools, the ferns, water-lilies and reeds, while wistfully speculating on the presents of water nymphs and naiads. This area became a place for recreation and Sunday afternoon gatherings: in the late 19th century there was a beer garden, a pavilion for dances, and of course – swimming pools. Alas, as the Edwards Aquifer was drilled into in many other places, the natural fountaining effect was diminished and many springs ceased to flow at all, save after heavy rains. To this day, though – the rivers and the springs and the areas around them are still cherished as parks.