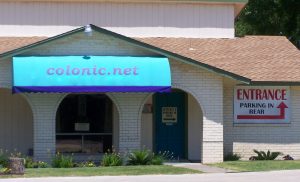 You know, there are so many signs about, on any street given over to commerce these days, sometimes you just sort of blank them out. Unless you are looking for that particular business – but that’s what a GPS unit is for, isn’t it? This must be very disappointing for the specialists, the agents, marketing experts and the sign-painters, for when everyone has a dazzling sign, then no one has a dazzling sign. It all becomes just part of the blurring together of the cityscape, and at worst one long and protracted eyesore. The louder and more raucous it all becomes visually (or any other way) the less we pay attention and the more that the sign-painters or designers or marketing experts have to up their game. How do you attract attention to your business – I guess the next step is to paint the whole building in an eye-catching color  . . .  Erick’s Tacos, on Nacogdoches Road in San Antonio has already done this, by the way – a brilliant, brilliant glow-in-dark even when your eyes are shut you can still see it neon orange. I really don’t know what’s coming next  . . .  which reminds me, at some point we’re gonna have to stop in and try the tacos.

Anyway, signs – the more there are, the less it seems that you would pay attention. A couple of weeks ago I read of a municipality in (I think Holland, or maybe Denmark) which possessed a city intersection, or traffic circle of such complexity, that it was a horror to negotiate – for automobiles, busses, bicyclists and pedestrians alike, in spite of being plastered at every possible point with cautionary and directional signs. Worse than that, it had earned a reputation for being the most hazardous and accident-prone traffic interchange in the city. Every sign added seemed to make it worse, and finally, the city engineer made a totally radical suggestion – remove every sign from the interchange, and trust that good sense and courtesy would do what every cautionary sign could not. It worked, by the way – accidents fell. Drivers had to pay attention, and exercise courtesy, and not drive into the interchange aggressively, assuming that they had the right of way. By the way, I’m not saying that following this example would do anything to make San Pedro and 410 any safer at rush house  . . .  but it does bear thinking about.

Anyway – signs and all. On the upside, sometimes they afford some amusement. In the town of Toledo, in Spain – there is actually a little avenue in the old part of town named for Toledo’s American namesake: yes, the Avenida Toledo d’ Ohio. A friend of mine who grew up in Ohio derived much merriment from this discovery. In Albuquerque, New Mexico, there is a major avenue which bears my mother’s maiden name – and one, which sadly runs parallel to it, which has her given name. Oh, if they had only intersected – what fun we would have had with that! And even the names of stores sometimes have odd juxtapositions: in the old part of Escondido, California, my daughter and I once noticed that there was a new sushi restaurant opening  . . .  right next to a small store which specialized in tropical fish. OK – so that’s one way of assuring that the sushi is really, really fresh. But for unfortunate signage, this one spotted recently in San Antonio does win my personal prize. I’ve been merciful – I edited out the local address and the phone number.

For all your San Antonio Real Estate needs,
Contact Realty United
Visit us online Here
Posted in Other, San Antonio Attractions
no comments yet
Comments on this entry are disabled
Like or Share
Loading likes...